In a preliminary rating by the National Weather Service, the tornado was determined to be an EF-3 with max winds of 150 mph.
WPVI
By Gray Hall, Katherine Scott and Christie Ileto 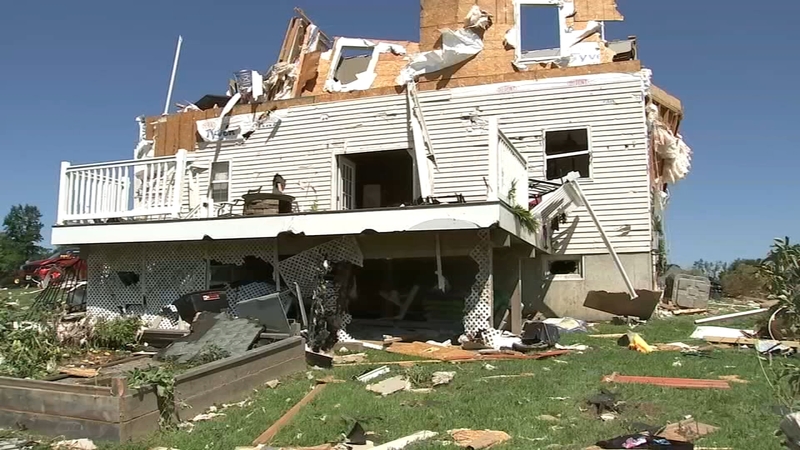 MULLICA HILL, New Jersey (WPVI) -- Some homes were utterly destroyed, some were badly damaged, while others were barely touched by a tornado that hit Mullica Hill, New Jersey on Wednesday as the remnants of Hurricane Ida swept through the area.

In a preliminary rating by the National Weather Service Thursday night, the tornado was determined to be an EF-3 with max winds of 150 mph.

The tornado touched down near Harrisonville, NJ doing mostly damage to trees and limbs before strengthening and moving northeast.

The tornado moved into the Willow Oaks subdivision strengthening further and producing significant damage to trees, as well as serious structural damage to a number of homes. The tornado continued to the northeast damaging trees and structures along its path before reaching a large commercial dairy farm where extensive damage occurred.

The tornado was on the ground for 12.6 miles before it lifted near Deptford. Two injuries were reported.

"Our community is destroyed. In five seconds. That is all it took," said Ashely Thomas, a Vineland teacher who is eight months pregnant.

Like so many others in this Mullica Hill neighborhood, she is in disbelief.

Chopper 6 was over Mullica Hill, New Jersey on Thursday morning after a tornado hit the area during severe storms on Wednesday.

At around 6 p.m. Wednesday a tornado ripped through her community along Josephine Lane. Her house was destroyed.

The twister showed her home no mercy. Other homes are also unrecognizable and look like a bomb went off inside. Families say all they could do is seek shelter in their basements and hope for the best.

Her husband Troy and their two daughters sought refuge in their basement when they got a tornado warning.

"We were huddled. He was over me. Everything was falling on our backs, and luckily our house has a walk-up basement or else we never would have gotten out," she said.

The damage left behind shows the power and intensity of this tornado. For some, there was no luck to be had, their homes are a total loss.

But looking at other properties, there is no evidence of a storm until you look across the street or next door.

"Is everybody ok? That is the first thing you think. This stuff, this can all be fixed but as long as everybody is safe, and thankfully they were," said Rob Lore.

Tornado rips through Mullica Hill. Roofs were ripped off several homes, a couple of homes were decimated, right now no report of any serious injuries. @6abc pic.twitter.com/G1UqbaSaJ8

Governor Phil Murphy and other local leaders surveyed the damage. About two dozen homes in the area have been destroyed and around 100 more were damaged.

"We will be sending in a major disaster declaration request today. I will speak shortly with the president," said Governor Murphy.

"Thank God and only by the grace of God was there no loss of life or serious injury," said Mayor Lou Manzo.

This is more than just about property damage but for some this tornado took everything. Many are searching the debris hoping to salvage something from the place they once called home.

"I was just collecting, walking around collecting photos that we had and just trying to see what we can get," said Milago Lopez.

Local organizations are helping those displaced by the tornado.

Josephine Lane in Mullica Hill, NJ finds itself directly in the path of this funnel cloud. The National Weather Service says a twister touched down in Gloucester County. @6abc
📱: Matthew Izzo https://t.co/6LE3f4OAHX pic.twitter.com/BCPpxpjvaV