After the first two trips, Johnny the squirrel returned for a lollipop and then a Starburst before the stock was depleted.
WPVI
By 6abc Digital Staff 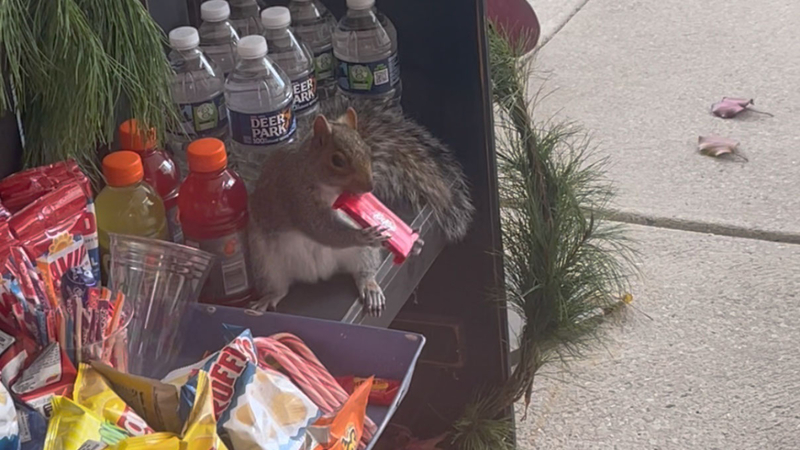 OCEAN CITY, New Jersey (WPVI) -- With all of the holiday packages arriving, residents are on high alert for porch pirates.

One unsuspecting little furry thief has been caught red-handed, or red pawed.

You see, Carol Longo has been leaving out candy, drinks and other treats for all of the delivery drivers coming to her Ocean City house.

The generous gesture has most certainly been appreciated.

"They have the good stuff here," one delivery driver can be heard saying after making a recent delivery.

But the drivers aren't the only ones enjoying the spread.

Longo noticed the candy was going really fast, so she kept restocking. It turns out a neighborhood squirrel named Johnny was helping himself.

And after further inspection and "surveillance," she learned that Johnny has been hard at work.

First, it was KitKats.

Video captured Johnny trying to fit two candy bars into his mouth, but he was having trouble. He decided two trips would be safer.

But it seems the crafty rodent definitely has a sweet tooth.

After the first two trips, Johnny returned for a lollipop and then a Starburst before the stock was depleted.

Longo says she stopped putting out the candy for now.

She says she's just happy everyone is enjoying the treats this holiday season.