The view from Chopper 6 showed the fuel tanker on its side in a bed of foam as crews worked to contain the leak.
WPVI
By 6abc Digital Staff and Katherine Scott 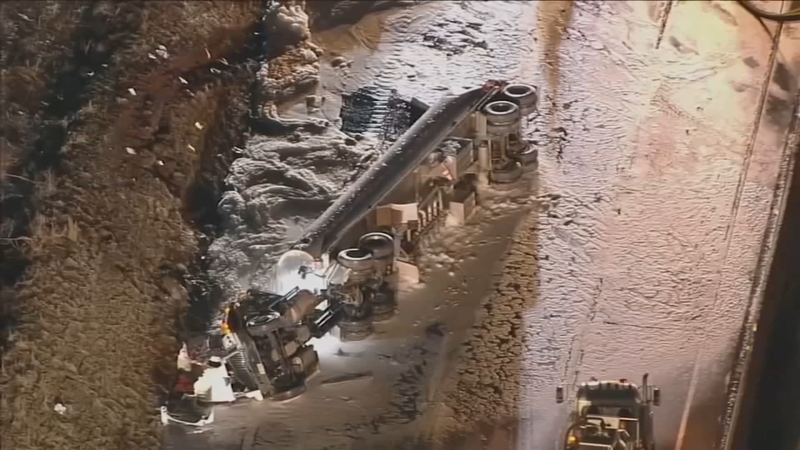 FORT WASHINGTON, Pennsylvania (WPVI) -- Both sides of the Pennsylvania Turnpike reopened to traffic on Thursday morning, nearly 12 hours after a tanker truck overturned creating a fuel spill and a nightmare for stranded drivers.

It happened just after 5 p.m. Wednesday on the eastbound lanes of the Turnpike near mile-marker 337 in Fort Washington.

The crash spilled gallons and gallons of fuel onto the highway.

The view from Chopper 6 showed the tanker truck on its side in a bed of foam as crews worked to contain the leak.

The crash brought the eastbound and westbound lanes of the Turnpike to a complete halt.

Chopper 6 video shows a massive backup following a tanker truck crash on the eastbound lanes of the Pa. Turnpike.

Alexis, her husband Ray and their 13-year-old son of Media, Delaware County were among those stuck in the massive gridlock.

"We hit it just as it happened, about three miles behind it," Alexis told Action News.

The family was on their way to a basketball game in New Brunswick, New Jersey.

"They did send out an all-call alert saying if you're running out of gas call 911, or if you're having an emergency call 911," Alexis said.

Officials urged stranded motorists who needed assistance or fuel to dial *11 (star 11) from their cellphone and provide the dispatcher with their milepost location and vehicle description.

Hours after the wreck, another tanker arrived on the scene appearing to siphon off the remaining fuel from the overturned tanker.

Eventually, barriers were put in place so drivers could turn around and get out, but it still took about another two hours for all of that traffic to clear.

"They are having us U-turn, which is why every 10 or 15 seconds we see a car go by on the other side," Alexis said.

Chris Cheng of Plainfield, who was also stuck on the Turnpike, was ready to get home.

The westbound lanes of the highway reopened early Thursday morning.

CLEARED - Emergency Road Closure - #PaTurnpike I-276 Eastbound at Norristown Exit #333 has been lifted. All eastbound lanes on I-276 are now open. pic.twitter.com/NKsakGUoUo

Authorities tell Action News the driver of the truck was hospitalized as a precaution.