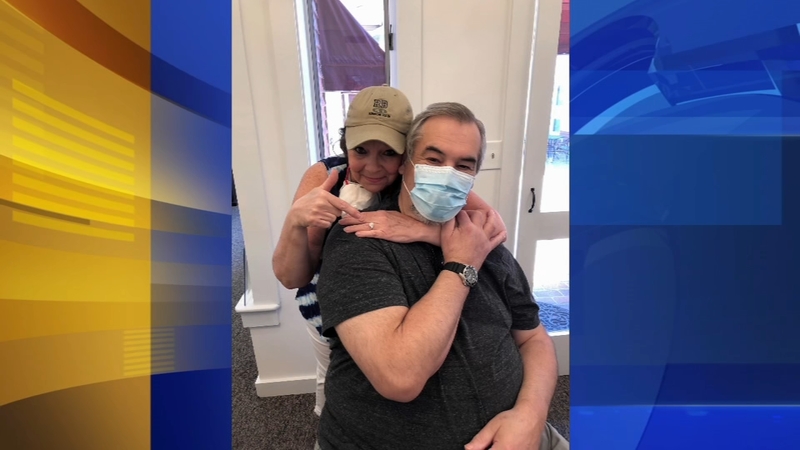 HAVERTOWN, Pennsylvania (WPVI) -- A Havertown man is sharing his story of survival after spending months working to recover from COVID-19.

Phil Shast is definitely in a better place now, but it took nearly two months of intensive medical care and physical therapy. He's sharing his story in the hopes others will take the virus seriously and take precautions.

Schast, 64, was determined to walk out of Bryn Mawr Rehab. He spent a month there, regaining his strength after COVID-19 hit his body hard. He says he barely remembers the three weeks prior he spent in the hospital.

"I remember being on my stomach, and I know they rolled me over, or pronated I guess is the terminology," he said.

He was put on a ventilator for ten days and says during that time he suffered a stroke, all while his girlfriend, Debbie Pope, held onto hope outside of the hospital.

"Because you can't see the person, can't hold their hand and let them know you're there, you can't do that," she said.

"I came back, I said I'm coming back for Debbie," said Schast.

And he did, but he's still working on his balance.

They both hope others understand the potential consequences of the virus.

"I think people who don't know anyone personally or haven't been sick themselves just think it's nothing, but how can I say it's an incredibly serious thing that is going around and we need to be more cautious," said Schast.

The couple is now not only celebrating survival, but also something else - an engagement!

"We've been together 17 years, she's been putting up with me so I figure by now she'd at least marry me," said Schast.

The happy couple is planning their wedding for September 2021.

Mr. Schast has diabetes so knew he was at a greater risk for complications but he doesn't know where or when he was exposed to coronavirus.