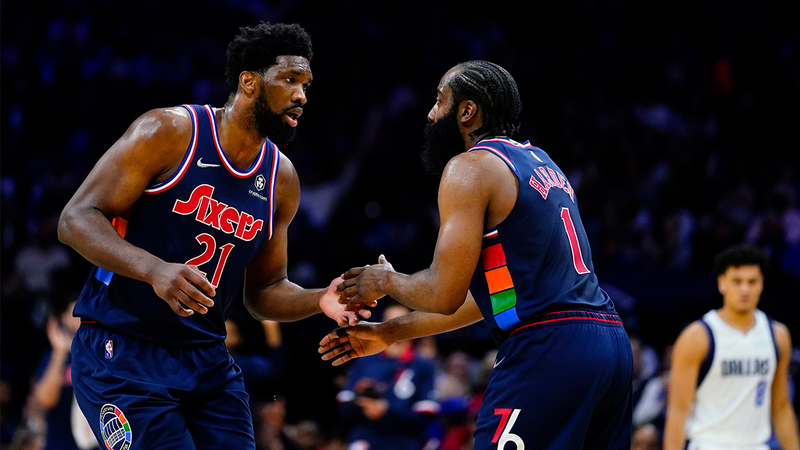 PHILADELPHIA (WPVI) -- The playoffs are finally here and the Sixers are stuck with a matchup none of us wanted.

They have to take on the Raptors, with Game 1 Saturday at 6 at the Wells Fargo Center.

Yes, the same Raptors that beat Philadelphia 3 out of 4 times this season. So it's no surprise fans are worried about the matchup. And, more specifically, the members of the team not named Joel Embiid.

All the buzz surrounding James Harden being the Robin to Joel Embiid's Batman?

That seems to have faded. And his struggles were magnified in a loss to Toronto last week when he only managed 13 points and shot 25 percent from the field.

I just don't sense the excitement and optimism surrounding this team that I did when he first got there.

Harden hasn't put up very big numbers down the stretch. Is that because he's been taking a pass-first mentality while trying to help Joel Embiid win the scoring title?

But he needs to be more aggressive offensively for the Sixers to take this series.

Then there's the matter of Matisse Thybulle, who won't be available for Games 3 and 4 in Toronto because he's not fully vaccinated and can't' travel to Canada.

This is something they've known was going to happen but it's a pretty big hit to lose your best defensive player for a good chunk of a series.

And how about Doc Rivers?

Do the Sixers need to make a deep run here for him to keep his job? He's been lashing out at the media lately and criticized for his substitutions and inability to adjust.

There's already been rumors he's in line for the vacant Lakers' job.

The big man likely has a bad taste in his mouth when it comes to these Raptors.

Our lasting memory of him north of the border in the playoffs? Crying outside the locker room three years ago when Kawhi Leonard hit that buzzer beater in Game 7.

Surely he wants a different outcome this time which is why I'm going... Sixers in 6.