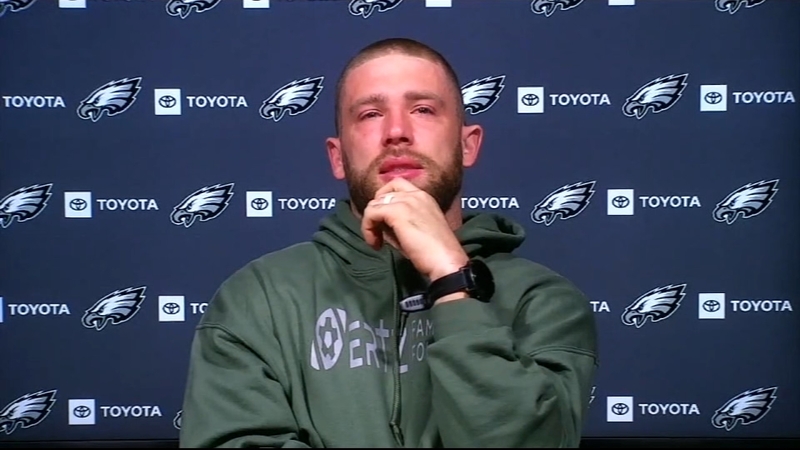 PHILADELPHIA (WPVI) -- It was an emotional moment for Philadelphia Eagles tight end Zach Ertz during a press conference on Monday following the team's loss to the Washington Football Team.

"I think this city is the best city to play for and I couldn't have asked for a better experience," said Ertz while fighting through tears on Monday.

It could be the end of the road for Ertz in Philadelphia after spending eight seasons and winning a Super Bowl with the team.

Powerful and emotional @ZERTZ_86 on the possibility that he's played his last game as an Eagle. If you think players don't "care" listen to this =>>> @6abc @Eagles pic.twitter.com/GDJb407SAA

Ertz's emotional moment hit the core of Birds fans who know just what an impact the tight end had on this city on and off the field.

"It was heartbreaking," said Charles Thompson, coach of the Chester Panthers football program.

In 2019, it was Ertz who surprised the program with a donation, equipment and a guest appearance.

"You don't get a lot of opportunities to meet people who genuinely care about the community," said Thompson.

It's not clear if Ertz played his last game with the Eagles, but fans are calling for a shake-up after a dismal season.

Liam Bernard of South Philly said, "Carson, I still have a lot of love for him, but I feel like the relationship with Philly is fractured."

Three years after Wentz finished third in NFL MVP voting and the Eagles won the franchise's only Super Bowl title behind backup quarterback Nick Foles, the team is heading toward a rebuild. The Eagles were the first team eliminated in the lowly NFC East and finished 4-11-1, missing the playoffs for the first time since 2016.

Wentz was benched in December, 18 months after receiving a $128 million, four-year contract extension that kicks in next season. Jalen Hurts showed potential in four starts but not enough to prove he's a franchise quarterback yet.

Trading Wentz means absorbing a significant cap hit of $33.8 million in dead money on Philadelphia's 2021 cap if a trade occurs before March 19. That number increases to $43.8 million if Wentz is traded after that date because he's due a $10 million roster bonus by the third day of the new league year. The higher figure in dead money could be split over two years - $19.3 million in 2021 and $24.5 million in 2022 - if Wentz is dealt after June 1.

"I don't think it's a secret that we moved up for him because of what we thought about him as a person, as a player," Roseman said about Wentz, who was selected with the No. 2 overall pick in 2016 after the Eagles traded up twice to reach that spot. "We gave him that extension because of the same things. And so, when you have players like that, they are like fingers on your hand. You can't even imagine that they are not part of you, that they are not here. That's how we feel about Carson."

Asked directly if the organization has ruled out trading Wentz, Roseman said: "That is not anything we are talking about right now. We are talking about a guy that's immensely talented, has a great work ethic and doing whatever we can to put him in the best possible situation to be successful."

Wentz hasn't spoken to reporters since he was pulled in the second half of a loss at Green Bay on Dec. 6.

"I'm not going to speak for Carson, obviously, but I can speak for myself and say that the relationship is good," coach Doug Pederson said. "It's fine. It's something that we're going to continue to build upon. I know Carson's disappointed. It's not the season that he had anticipated. It's not the season I had anticipated as the head coach. There were a lot of moving parts. It's not about one guy here. It takes all of us and that's something that we've stressed a lot here.

"But at the same time, I've been hired as the head coach. I've been challenged as the head coach; personally challenged myself to get things right, to get him right and to make sure that as we move forward that we're doing everything in the best interests of the team. And I know we can do that and obviously surrounding the quarterback position with the right guys, with the right men, and that's also something that we're going to work on this offseason."

In addition to Ertz, other veterans from the Super Bowl roster who could be on the move include center Jason Kelce, who has contemplated retirement in the past, wide receiver Alshon Jeffery, defensive end Brandon Graham, left tackle Jason Peters and defensive back Jalen Mills.