"One life is too many, but multiple lives is heart-wrenching," one neighbor said.
WPVI
By 6abc Digital Staff 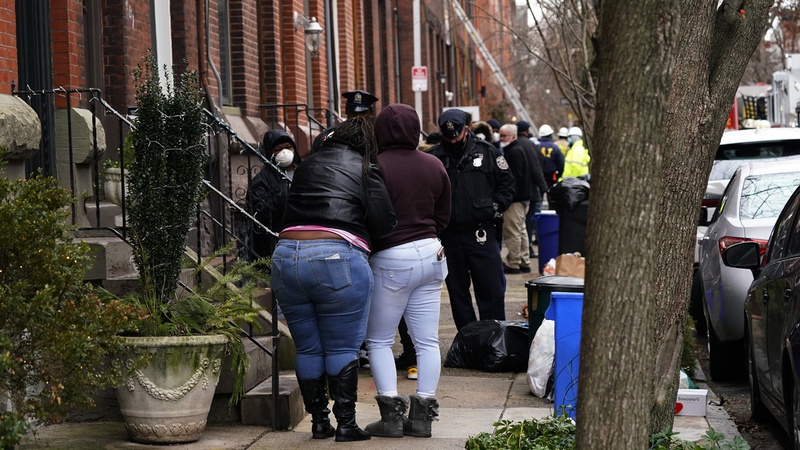 PHILADELPHIA (WPVI) -- Neighbors in the Fairmount section of Philadelphia coming to terms with a devastating fire on Wednesday morning took the lives of at least eight children and four adults inside a duplex.

"It's a very solid, warm community. We all look out for each other," Andrea, who lives two blocks from the fire scene on N. 23rd Street, told Action News.

"I was surprised to see all the fire departments, police vehicles and helicopters and found it was a fire with fatalities which is just heartbreaking. I just can't think of anything worse than that," Andrea said.

Andrea said she often walks her dog past the duplex. She didn't see the fire but said it's heartbreaking.

"One life is too many, but multiple lives is heart-wrenching," Andrea said.

This fire was put out in less than an hour, but the damage it did and the heartbreak and pain it caused will last for generations.

The close-knit Fairmount community gathered as they could during the pandemic with a vigil over Zoom Wednesday night.

A guidance counselor at Bache Martin School, where some of the youngest victims were enrolled, told those at the vigil, there's no right way to grieve.
Bache-Martin is virtual this week.

But counseling and crisis therapy will be provided to students.

"I just heard about 6:30. I heard screams and I don't know if it came from the building or from the streets, a witness possibly," said Kyle Medernach of Fairmount.

Some living here were able to capture the fire on cellphone video as it burned.

"As a neighbor, it is kind of a wake-up call to me to understand what I should do in a situation like this," said Medernach.

Neighbor Bill Richards who has lived on the block for 24 years said he heard a woman yell, "Oh my God! Oh my God!"

He then heard fire trucks and came outside.

"It's very upsetting," Richards said. "I just can't wrap myself around it."

Residents in the Fairmount neighborhood were woken up by screams and flames.

Richards spoke about a young man he has watched grow up who lives in the building.

Firefighters arrived to find heavy flames shooting from the second story of the three-story row house.
The fire department said it took about 50 minutes to bring the fire under control.

"The only thing I want to know is what happened and how maybe to stop it happening again," said resident Max Krumpholz.

Lindsay Hull told Action News she came upon the scene at 7 a.m. She saw stretchers.

She said her friend lives in the building next to the duplex.

Kyle Medernach said he has walked by the building for years.

He knows the faces of the families who lived there.

Kyle Medernach said he has walked by the building for years.

Medernach said he was woken up by screams outside and then he saw the flames.

"It was just a shocking moment," Medernach said. "Thoughts and prayers with the families and the victims."

There was no immediate word on the cause of this fire, but sources tell Action News that investigators are looking into the possibility the blaze might have been sparked after a child started a Christmas tree fire.

One man named Kevin just moved into the neighborhood last month one block away.

He was awake when he saw the fire trucks and ambulances zoom by.

Kevin stepped outside and smelled the smoke coming from down the street.

"I saw plenty of smoke coming out of the windows," Kevin said. "I did eventually see a young woman run down the street...she looked in tears. She was very devastated. It was surreal to see that."

Kevin said because of the duplex-style housing on the block, "It can happen to anyone really."

"These buildings usually consist of three different apartments, so if something happens to one it can jeopardize everyone else, as well. You really need to be careful," Kevin said.

She said another fire occurred just before Thanksgiving on the same block.