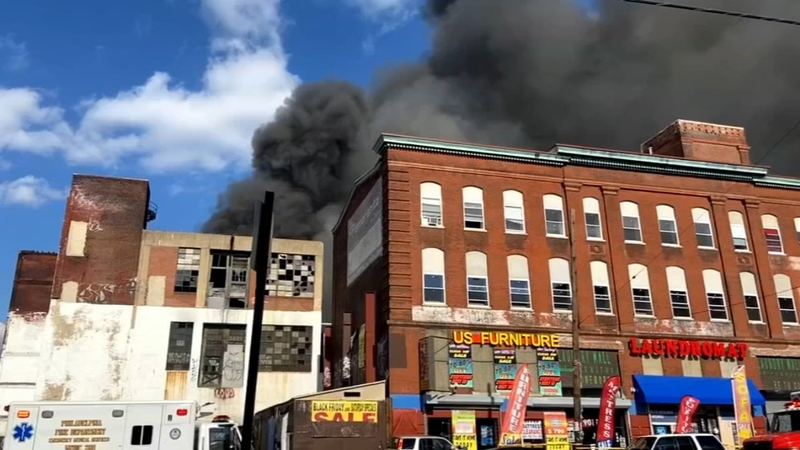 PHILADELPHIA (WPVI) -- Philadelphia fire crews battled a two-alarm fire at a vacant warehouse in Kensington, right before noon on Sunday. Crews said when they arrived there was a heavily advanced fire in the roof. Many residents said they came out to see the fire.

"When I got here it was fully engulfed, it was a raging fire," said Wesley Howell, from West Kensington.

Viewer video shows the heavy black smoke coming out of the warehouse on the 400 block of East Allegheny Avenue.

"It is sad because it's a building that's been empty for, I don't know how many years already in this neighborhood," said Luis Diaz, from West Kensington.

Around 100 firefighters responded, according to Fire Commissioner Adam Thiel, who said paramedics, The Salvation Army, and The Red Cross arrived as a precaution.

Some stores nearby said they had to close for the day because of the smoke that started to billow inside their stores, like US Furniture. A salesman said he was inside the store with about four customers when the fire broke out.

"When it first started you couldn't see nothing inside the store," said Mahmoud Abukendn, who works at US Furniture on East Allegheny Avenue.

Fire crews said they've previously been to this location for a fire.

Residents said they remembered a fire around this location before.

"This is the second time it happened to this building," said Diaz.

Employees of US Furniture said they hope the store will be back open Monday. In the meantime, they said they are thankful no one was hurt.