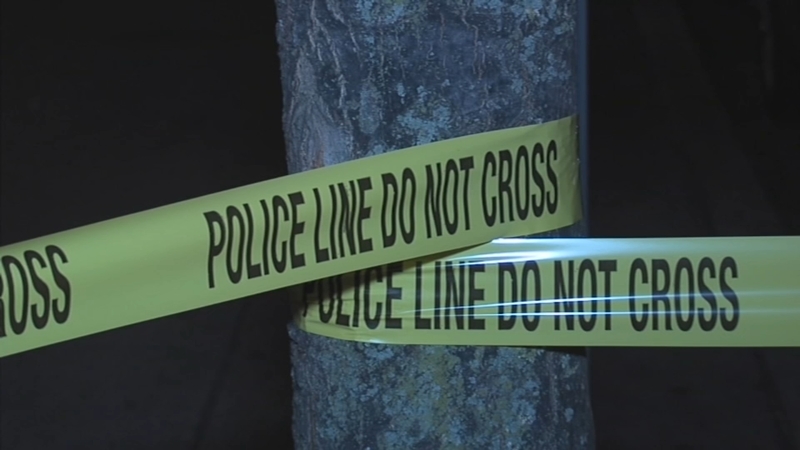 Two women, a 33-year-old and 36-year-old, were shot while on a front porch near 46th and Walnut streets in West Philadelphia around 11:30 p.m.

The 36-year-old victim was shot in the face, chest and torso. She was pronounced dead at an area hospital.

The 33-year-old victim remains in critical condition with gunshot wounds to her arms and legs. She's expected to survive, according to police.

The evidence markers were scattered along the road and sidewalk.

"We're also being told that the 33-year-old who was shot in the arm and both legs did live there. So they were just on the front steps hanging out with each other when shooters came up and fired at least 21 shots in very close proximity," said Chief Inspector Scott Small.

Around the same time, a man was shot to death near Tackawanna and Foulkrod streets in the city's Frankford section.

Police said the 45-year-old man was walking along a pathway between several apartment buildings at Whitehall Apartments when someone shot him at close proximity.

He died from his injuries.

Police are working to determine the motive behind both of the homicide investigations.

Police are also investigating an attempted robbery in Northeast Philadelphia that ended in gunfire that also occurred around 11:30 p.m.

They said the 22-year-old manager was closing up his candy shop at Cheltenham Avenue and Rutland Street when a suspect approached and put a gun to his head.

The victim ran, but was shot in the arm as he fled.

Police said the 22-year-old manager was closing up his candy shop at Cheltenham Avenue and Rutland Street when a gunman approached and put a gun to his head.

Police said the 22-year-old got in his car to drive himself to the hospital, where he's now in stable condition.

The search for the shooter continues.

A man is in extremely critical condition after being shot in the face outside a laundromat in Southwest Philadelphia.

Police found more than 30 shell casings along the 5200 block of Woodland Avenue around 10:30 p.m. Tuesday.

A man was shot in the face outside a laundromat in Southwest Philadelphia.

They say several people started firing at the man as he left the laundromat.