According to the Action News data journalism team, the homicide rate is now up 8% from last year, which broke a somber record.
WPVI 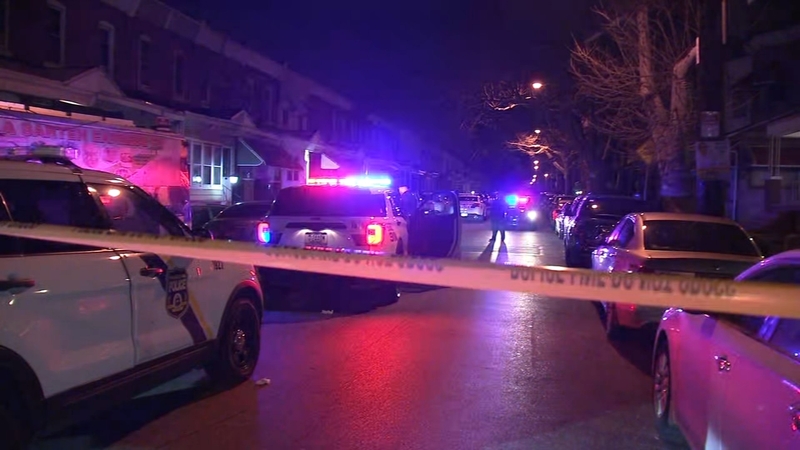 Police say a 28-year-old man was found in the road with multiple gunshot wounds.

He was taken to Penn Presbyterian Medical Center but died shortly after 12:30 a.m. Friday.

The victim's name has not been released. No arrests have been made.

In a tweet Friday, Police Commissioner Danielle Outlaw said she is focused on ending the violence.

"PPD will continue to utilize every resource we have to stem this tide of violence, and will not rest until we bring to justice those who seek to cause harm to our city and its people. It's our #1 priority," she said.

We are devastated that 100 people have been murdered this year. PPD will continue to utilize every resource we have to stem this tide of violence, and will not rest until we bring to justice those who seek to cause harm...

According to the Action News data journalism team, the homicide rate is now up 8% from last year, which broke a somber record.

A total of 562 people were killed in 2021, according to the Philadelphia Police Department.

"We need help, we need more than just, 'Oh, this is a terrible thing happening.' We know that. Now what?" asked Rysheda Elliott of Mothers in Charge.

After a record number of homicides last year, the violence hasn't let up in 2022.

The group, whose focus is to support victims and their families, says it is important for people to understand what is happening on the streets of Philadelphia.

"A lot of it is retaliation, 'You know you killed my brother, I kill your son,'" said Elliott.

She says trying to tell a young man to put the gun down is easier said than done.

Elliott quoted a young man who told her recently, "I'm in a war. You're telling me to think before I act and I got somebody chasing me with a gun."

Then there are the victims you don't hear about, who are collateral damage.

"And I've seen the rage in the father's face where they feel helpless. I've seen men who have committed suicide," continued Ms. Elliott.

Members of Mothers in Charge have been on the front lines and not just talking a good game.

"We're helping people - mothers who have suffered with maybe drug addiction, I'm taking them to rehab because of the trauma or taken them to the mental health crisis center," said Elliott.

Elliott says Philadelphia has been in a social crisis where violence and death have not taken a holiday.

"This is like a war, and it's like, what side are you on? We gotta be able to be the solution to the problem," said Elliott.

In a statement Thursday, Mayor Jim Kenney said the violence in the city pains him to the core.