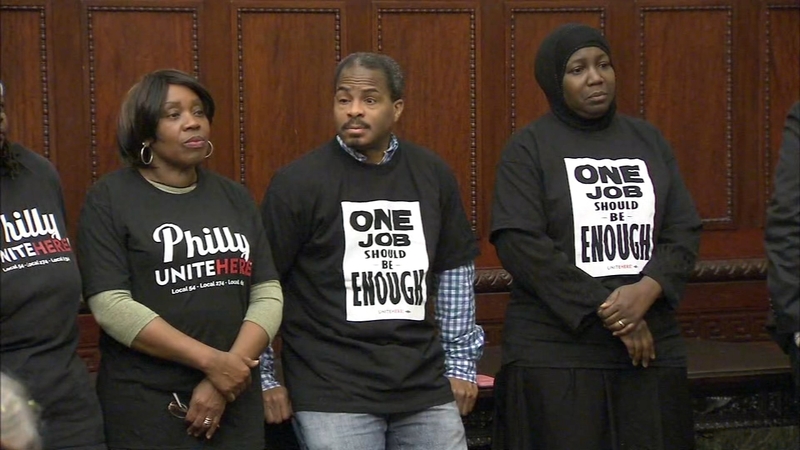 CENTER CITY (WPVI) -- Philadelphia Mayor Jim Kenney signed two bills on Thursday, one gradually raising the minimum wage for city workers to $15 per hour and the other ensuring employees will know when and how much they will work.

Far too many of our residents who work full-time still have a hard time getting by. This is unacceptable. Today, I signed two bills into law that will help hard-working Philadelphians and their families get ahead. When workers succeed, Philadelphia succeeds. pic.twitter.com/jOIgRR6jJ0

All City workers, contractors, and subcontractors will earn a minimum wage of $15 per hour by 2022.

"While Mayor Kenney supports a $15 minimum wage for all workers, both in and outside of government, the City does not have the legislative authority to do that. But with this new measure, the City is doing what it can to support workers, leading by example and fostering a citywide culture of attaching value to work," the Office of the Mayor says.

The Office of the Mayor says it phases in over four years, resulting in a $15 minimum on July 1, 2022, allowing contractors and subcontractors time to gradually adjust to the new rate schedule.

The current rate of $12.20 an hour will rise under the following schedule:

The minimum wage standard will continue to rise based on annual consumer price index adjustments once it hits $15 / hour.

"This affects all Philadelphia municipal government workers, contractors, and subcontractors. Generally speaking, if a position is funded by City dollars, it probably falls under this law," the Office of the Mayor says.

We’re increasing the minimum wage for both @PhiladelphiaGov employees and employees of City contractors. Now, they're going to earn at least $15/hr. We’re all eagerly waiting for the day when the Commonwealth will raise the minimum wage statewide. #FightFor15 pic.twitter.com/IfDeZRF2BZ

The legislation will affect about 130,000 hourly workers in the retail, food service, and hospitality sectors.

New provisions include advance notice of schedules, a pathway to access more hours of work, compensation for last-minute schedule changes, and protection from retaliation.

#FairWorkWeekPHL will bring much-needed stability to the lives of many Philadelphians, especially for our retail, hospitality, and restaurant workers. Employees should know at least two weeks in advance when they’re scheduled to work. It’s the right thing to do. pic.twitter.com/La9YNDBZhJ