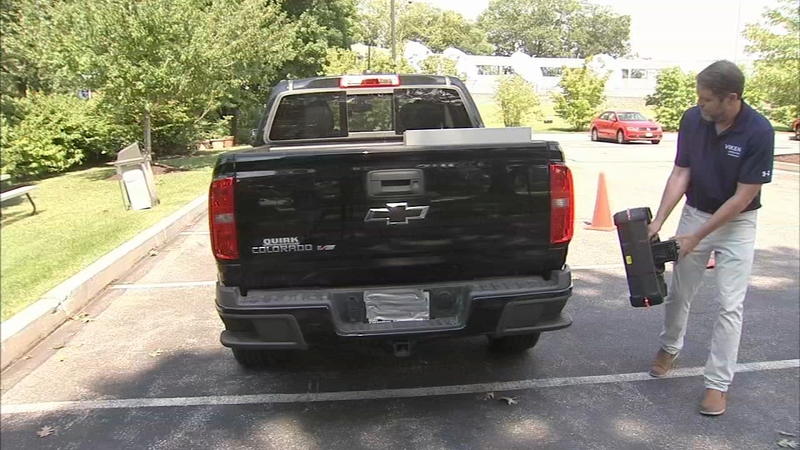 PHILADELPHIA (WPVI) -- It is being called technology that's exponentially changing the fight against drug trafficking both inside the U.S. and at Ports of entry like here at Packer Marine Terminal in South Philadelphia.

James Ryan of Viken Technologies is using a revolutionary x-ray scanner in this demonstration to look for contraband that may be hidden in this truck.

The X-ray imager called the HBI 120 is being used by a growing number of federal and local law enforcement agencies to find concealed explosives, narcotics, and other contraband not just in vehicles but items that may be hidden behind walls in buildings.

"So as you can see in the video, it picked up that bottle of water behind the drywall," said Ryan.

The high tech gear developed by Viken Detection is similar to equipment that was used by U.S. Customs in making that $1.3 billion cocaine bust at the Packer Marine Terminal, the largest drug bust in U.S. history last month. Agents used an X-Ray truck scanner that detected anomalies in some of the containers on a Liberian flagged vessel, the MSC Gayane.

"It's a scaled-up version of this with some other interesting technologies," said Ryan.

At $40,000 apiece, Ryan says more than 500 of these devices have been sold to law enforcement agencies around the world.

"I think why this is a game-changer in the industry is they could have this in the trunk of their car and if they're suspicious and see something that doesn't quite look right, and they wanna do a scan of the vehicle, now they can do it in minutes instead of hours," said Ryan.

Ryan says Viken Detection is developing other technologies for customs and border protection trying to stay one step ahead of the bad guys.

"There's nothing more exciting than getting texts and emails from officers around the world telling us what they found and how they found it," he says.