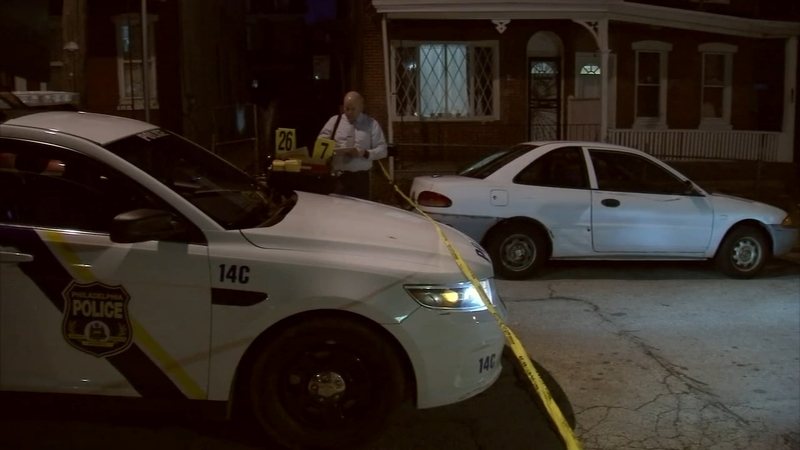 PHILADELPHIA (WPVI) -- Philadelphia police are looking for the person who fired shots in Germantown Sunday evening, grazing an 18-month-old in the head and striking a man in the shoulder.

The family of that 18-month-old boy told Action News he was moved to Children's Hospital of Philadelphia after suffering the graze wound. Police say he was in the arms of his uncle, who was likely the target of the shooting.

"I have to leave my job, they call me and tell me my grandkid got shot," said Sidney Clark, the grandfather of the adult victim.

Police say the 26-year-old man was holding his 18-month-old nephew on East Pastorious Street in Germantown when around 5:00 p.m. a car pulled up, and shots were fired.

"He did put himself around the baby when he dove to the ground, probably saving the child's life," said Acting Police Commissioner Christine Coulter. "As horrible as it is, it could've been way worse. Another half an inch, that child would be dead."

"There's was no doubt that when they were firing the gun, they had to see the kid. They were right up on them. So they made a decision to fire," said Coulter.

Family members hope an arrest is made soon.

"Eighteen months. He can't even come out here and play in the daytime? That's bad," said Clark.

Both victims are in stable condition.

It's been a deadly weekend in Philadelphia. At least six people have been killed since Saturday morning.

"This weekend's violence was nothing short of horrific. My condolences go out to the loved ones of the victims whose lives were tragically lost. My prayers are also with the toddler who was grazed by a bullet earlier today. The Police are undergoing thorough investigations and our Community Crisis Intervention Program workers are out in the impacted communities, but we need help from everyone to solve these crimes and keep our neighbors safe," said Kenney. "As I've said before, this senseless violence leaves deep scars on our communities. Reducing it is our Administration's top priority. We're investing in proven, data-informed strategies to significantly reduce homicides and shootings."