Man injured, offices of Pa. senator and NAACP damaged by gunfire in Philadelphia

"To see how hard we fight for the NAACP, it's tough. It's a bullet hole in the window," said Michael Cogbill.
WPVI
By 6abc Digital Staff, Corey Davis and Bob Brooks 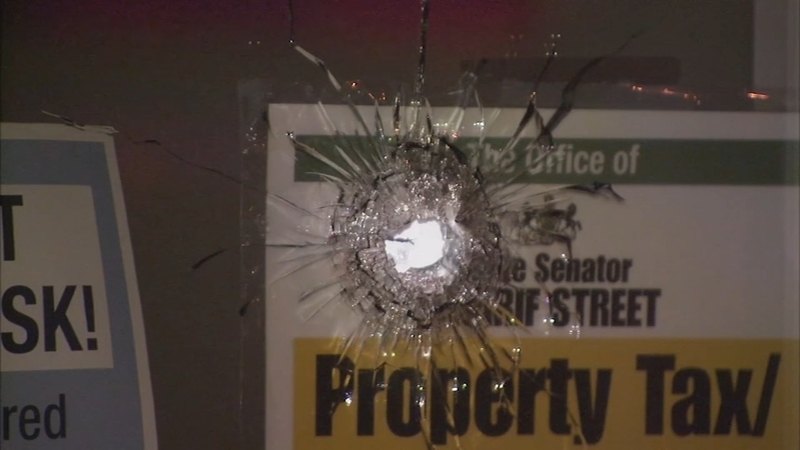 Police said at least three bullets went through the windows of the buildings at the intersection of Germantown and Windrim avenues at 11:30 p.m. Monday.

According to police, the victim, a 25-year-old man, may have been involved in a shootout because they found a trail of blood that led them to a bloody gun about a block away.

The victim was shot at least five times and placed in critical condition after police said he was driven to Temple University Hospital by someone in a private vehicle.

Street's office and the NAACP branch were closed at the time of the shooting.

Street saw the bullet holes in the building and surveyed damage before leaving to Harrisburg for the next legislative session.

He told Action News that he's pushing to tap into the billions of dollars of surplus state funding.

"I estimate that if we did that statewide, we could address problems across the Commonwealth and push another $100 million into the City of Philadelphia for some of the programs that address gun violence," added Street. "There are so many different things that have to be addressed around this."

Police said the victim may have been involved in a shootout because they found a bloody gun about a block away.

Many people said that damage done to the NAACP office tarnishes the organization's efforts to combat gun violence.

"To see this on the news and to see this office, and to see how hard we fight for the NAACP, it's tough. It's a bullet hole in the window. This is our most prominent civil rights organization," said Michael Cogbill, chair of the Pennsylvania NAACP Political Action Committee.

Cogbill says it's hard to find words to describe the situation.

"We have to get those who are doing these shootings, these senseless shootings, to understand that you are not just hurting one family, you are hurting your entire community," said Philadelphia NAACP President Catherine Hicks.

Investigators say they are working to gather surveillance video in hopes of piecing together more evidence.

Anyone with information about the shooting is asked to contact police.