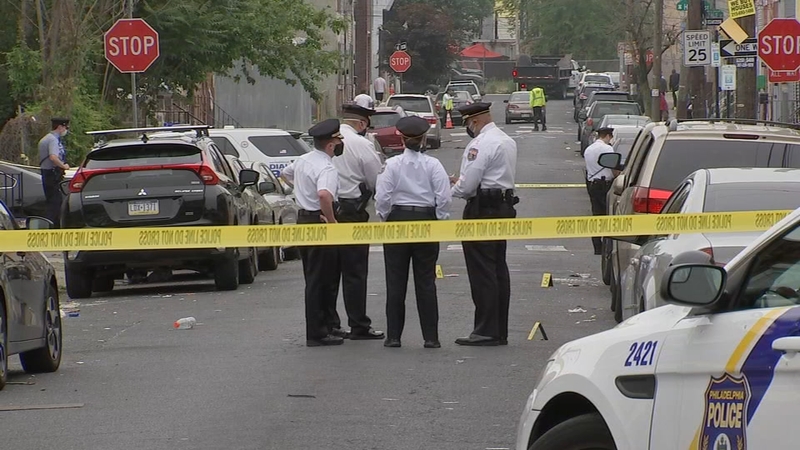 Investigators report the second quadruple shooting occurred on Hart Lane between Ruth and Jasper in Kensington shortly before 6 a.m. Wednesday.

Four males were injured and are listed in stable condition.

"This is dangerous. It's broad daylight. Obviously there are kids out here. We have to stop this," Philadelphia Police Deputy Commissioner Melvin Singleton said.

Police have a description of a dark blue or black Nissan speeding away from the area.

Investigators believe the gunshots were fired from the vehicle.

A motive is still under investigation.

"Most of the shootings in this area we find to be drug related. We're not sure, we're conducting investigations right now," Singleton added.

Police Commissioner Danielle Outlaw was also on the scene.

"We haven't had the opportunity to determine if they're different calibers yet or to determine whether or not there was gunfire exchanged, but either way, nonetheless, it's ridiculous all the way around," Outlaw said.

Just eight hours prior, four people were shot in North Philadelphia at 8th and Somerset streets.

Investigators said 21 shell casings were found at the scene.

Four men, between the ages of 31 and 41, were shot and being treated at the hospital.

Outlaw emphasized, "It's only May. We know the weather is going to get warmer. We need to do what we can to get ahead of this before it gets worse."
Report a correction or typo
Related topics:
philadelphiakensington (philadelphia)north philadelphiashootingviolence
Copyright © 2021 WPVI-TV. All Rights Reserved.
TOP STORIES
Police investigate officer-involved shooting in North Philly
Missing Bucks Co. woman's car found in Northeast Philly: Sources
Philly restaurant mandates proof of vaccination to dine inside
Tornado outbreak: 8 twisters confirmed in Philadelphia region
Six people shot since Friday evening in Philadelphia
Several victims targeted in Spring Garden crime spree
FDA says it's working as fast as possible to fully approve vaccines
Show More
Family, friends pay final respects for firefighter in Montco
Mobile home park struck by tornado: "I just saw debris"
Video shows car dealership being hit by tornado in Trevose
Family decries controversial arrest of Texas teen
House fails to extend eviction moratorium ahead of 6-week recess
More TOP STORIES News