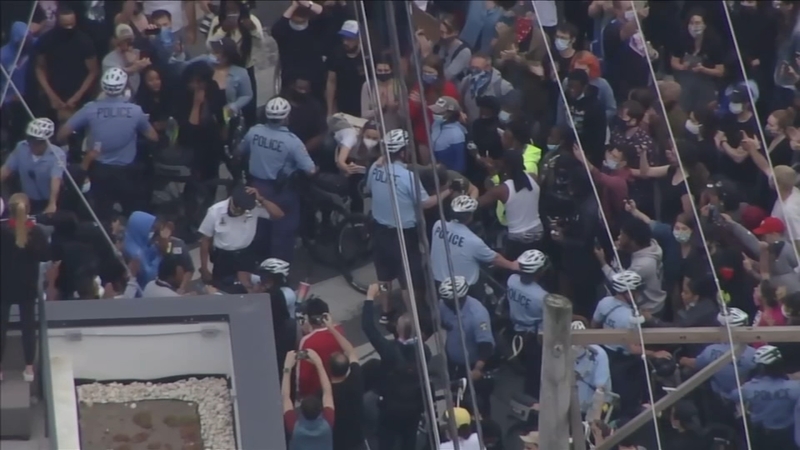 PHILADELPHIA (WPVI) -- Hundreds of people marched peacefully through the streets of Philadelphia on Tuesday, protesting the police treatment of African Americans.

Chopper 6 was high in the sky every step of the way as residents let their voices be heard on the ground on the fourth day of demonstrations.

'It's bigger than just a riot and looting': Philly protesters let their voice be heard during peaceful demonstration on June 2, 2020.

In the crowd was Alannah Atkins.

On Monday, she was struck by a rubber pellet in the face while protesting.

But she's not upset. She plans to change the future.

"I also wanna be a cop when I get older. I'll go to the academy and graduate from there and then I change the system and make a difference," said Atkins.

Andrew Lochbihler brought up this suggestion for future marches.

He said, "Philadelphia police you need to get loudspeakers and communicate. The crowd wants to communicate with you."

Demonstrators kneel at Girard and Frankford... the heart of Fishtown. A peaceful demonstration Tuesday night that has now gone past the 8:30pm city curfew @6abc pic.twitter.com/fjL3UIKPsu

The protests continued into much of the night without any issues.

In Philadelphia's Fishtown section, officers could be seen hugging and kneeling with demonstrators.

The calming moment was the same section of the city where on Monday night a group of residents could be seen armed with bats and shovels.

"It was a deterrent and I know the people who had the bats but it was just a deterrent no one was trying to hurt anyone here," one man told Action News.

Protesters - like others across the country, are marching in the memory of George Floyd, a black man who was pinned by a Minneapolis officer who put his knee on the handcuffed man's neck. Floyd died while in police custody.

Manslaughter and third-degree murder charges have been filed against Derek Chauvin, the officer who prosecutors say held his knee on Floyd's neck for nearly nine minutes.

Chauvin and the other three officers at the scene have been fired. The Department of Justice is investigating.

The investigation will examine the "policies, procedures, and practices over the past 10 years" to determine if the police department "has engaged in systemic discriminatory practices towards people of color," a statement said.

If so, the investigation will work to "ensure any such practices are stopped," the statement said.

Walz called this investigation "only one of many steps to come in our effort to restore trust with those in the community who have been unseen and unheard for far too long."

A mandatory curfew was again in effect for the City of Philadelphia from 8:30 p.m. Tuesday.

The curfew went into effect a little later than past nights due to the Pennsylvania Primary Election. The curfew ended at 6 a.m. Wednesday, June 3.

Today is the PA Primary Election. Tonight’s curfew begins at 8:30 p.m. to allow residents time to vote and return home before curfew.

City officials instituted a citywide curfew due to the looting and vandalism that erupted over the past few days following peaceful protests over the death of George Floyd while in police custody.

Officials closed some streets in Center City on Monday. The closure ran from Market Street to Walnut Street, from the Delaware River to the Schuylkill River.

The Ben Franklin Bridge was briefly closed to vehicle and pedestrian traffic but has since reopened.

The #BenFranklinBridge is closed to vehicle and pedestrian traffic until further notice due to police activity in Philadelphia. pic.twitter.com/Jc2fmPlpKt

During a news conference on Tuesday afternoon, Mayor Jim Kenney urged Philadelphians to support one another.

"Let's keep each other safe while continuing to support each other through our grief," he said.
He denounced reports of vigilantism, including the group in Fishtown.

"We do not condone vigilantism...we will not tolerate it moving forward," he said.

"We fully uphold everyone's right to peacefully protest...we will not tolerate acts of violence," she said.

She said that Monday's deployment of tear gas by police on a group of protesters who blocked the Vine Expressway is being investigated.