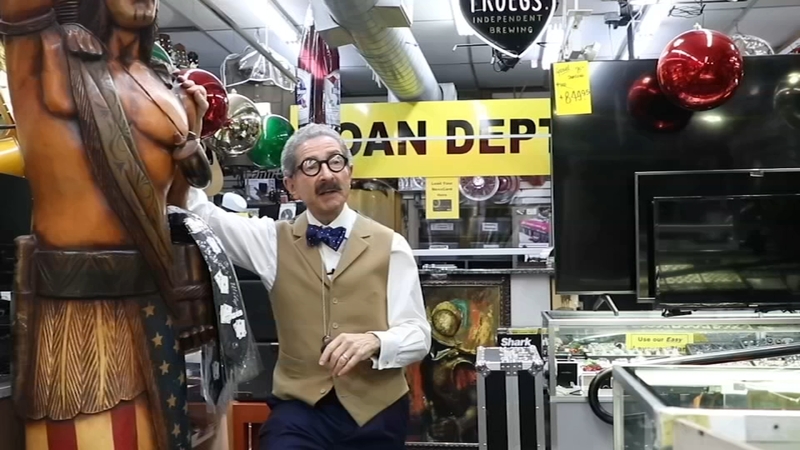 UPPER DARBY, Pennsylvania (WPVI) -- Now that the holidays are behind us, one local business owner says he will take those unwanted or unused gifts you received off your hands and pay you for it.

His father started the original store in Chester, Pennsylvania in 1921.

"I never wanted to do anything else. I always wanted to be in the store with my father," said Myerson.

Myerson keeps a photograph in the store of him with his father from 1971.

Now, the shop is in Upper Darby and Myerson has earned a name for himself. Now, he's better known as "Philly's Pawn Boss," thanks in part to his many local commercials.

In his commercials, Myerson claims he buys everything.

"Anything of value, yes," he said.

Customers can find everything from jewelry to trains.

"It's sort of a toy store for adults," said Myerson. "It's just fun to see interesting merchandise. I like the unusual."

Myerson has collectible items available, like a ceremonial helmet that dates to the 1880s.

There is also World War I and World War II memorabilia, like a silk map in a frame. He says silk maps were given to the troops, instead of paper maps, because it wouldn't disintegrate in inclement weather.

He even has a chair that Pope Francis sat on.

"It was made for him specifically for the event in Philadelphia in 2015," said Myerson.

There's also lots of sports memorabilia. For boxing fans, he has a pair of Muhammad Ali's signed trunks and he has lots of football fan favorites too.

"We do have an exact replica of the Lombardi Trophy here," said Myerson.

It was used in one of his many commercials that have made him somewhat of a local celebrity.

In that commercial he says, "We always pay top dollar, because at my shop, every day is showtime," which has become his signature catchphrase.

Myerson says he's happy to take pictures with fans who recognize him when they come into the store.

Myerson calls himself a problem solver since clients can purchase items or get a loan.

"Every day is different. I like interacting with people," said Myerson. "We do get a lot of stories."

But Myerson says to stay in business for 100 years, it's all about customers' trust.

"I guarantee everything," said Myerson. "Because I feel that's the way they're going to feel comfortable."