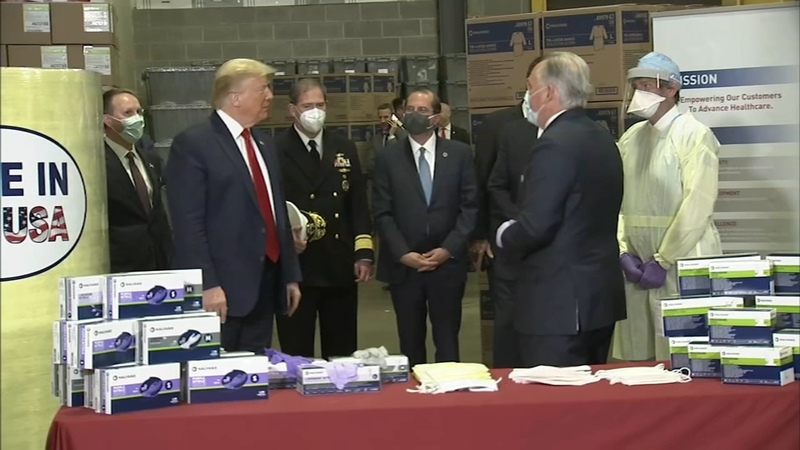 UPPER MACUNGIE, Pennsylvania (WPVI) -- President Donald Trump visited the battleground state of Pennsylvania to tour a distribution center of medical and surgical products for healthcare facilities, including personal protective equipment in the fight against the coronavirus.

Trump's visit Thursday is to a warehouse of Virginia-based Owens and Minor in suburban Allentown.

Inside, the president took about an hour tour of the facility that produces medical and surgical supplies.

He did not wear a mask while inside the facility.


Trump did not take questions from the press. However, he did speak to the facility workers.

He thanked them for keeping the medical supply going.

"Every day you prove that American workers are truly the best in the world," Trump said.

But also pivoted his speech into what was a campaign-style event. He announced a new initiative to replenish the strategic national stockpile of medical equipment.

The emphasis of that is for most of it to be made here in the USA.

"The U.S. government will now stockpile three whole months, much of it made in the USA," Trump said.

As for the reason for a lack of equipment early on during the outbreak?

"Under the previous administration the stockpile was depleted," he said.

"You have to get your governor of Pennsylvania to start opening up a little bit. You have areas that are barely affected and they want to keep them closed," Trump said.

Though Governor Wolf has, in fact, done that. Restrictions have loosened in less affected parts of the state.

And he pointed to mass testing as the reason why cases of the virus are so high here.

"We have more cases than anyone in the world, but why? Because we do more testing. When you test you have a case," he said.

In rebuttal to that, local Democratic Congressman Brendan Boyle said more testing is exactly what we need.

There were some protestors in the crowd, but most of the people there were supporters of the president.

It is Trump's second visit to Pennsylvania this year. Pennsylvania's 20 electoral votes are perhaps this year's premier electoral prize state after Trump's unexpected win in Pennsylvania in 2016 helped pave his way to the White House.

Trump did particularly well in the politically moderate Allentown area.

The Pennsylvania Department of Health confirmed 938 additional positive cases of COVID-19, bringing the statewide total to 59,636.
The state reported 4,218 total deaths, an increase from the 3,943 total deaths reported Wednesday.

Officials said there were 44 new deaths; 231 were reported as a result of a reconciliation of data over the past several weeks. This means the department added 275 total deaths to the data.

Some Pa. counties continue on path to defy governor's orders

Face masks and mandatory selfies for drivers: How Uber rides are about to change