The aftermath left a huge hole in the ground, which exposed the 100-year-old underground infrastructure that had to be rebuilt.
WPVI
By Corey Davis 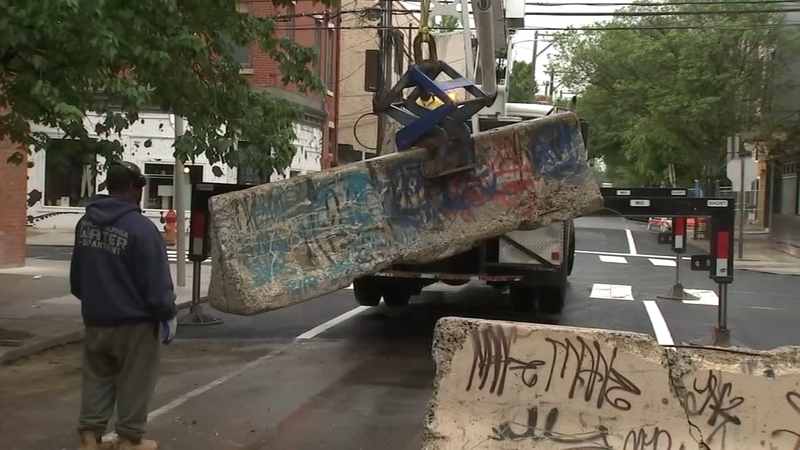 PHILADELPHIA (WPVI) -- The intersection at South 6th and Bainbridge streets in the Queen Village section of Philadelphia reopened after months of repairs following a massive water main break.

Water department officials told residents over the weekend that the goal was to reopen the intersection Thursday as long as there weren't any unexpected delays.

Thursday came and went, but now the intersection reopened on Friday.

The road has been repaved and lines are now repainted.

It's been 10 months since a massive water main break sent thousands of gallons of water rushing into homes and businesses back in July.

The water main initially broke while families were sleeping and most businesses closed, so rescue crews had to wake people up and rush them to safety.

The aftermath left a huge hole in the ground, which exposed the 100-year-old underground infrastructure that had to be rebuilt.

Construction, along with the pandemic, dealt a major blow to business owners, forcing some to shut down while others struggled to keep customers.

The water department and PECO worked on the repairs that slowly transformed the intersection.

"We've seen times where there has been little progress and times where they're working on it, so we're definitely ready for this to be completed and hopeful that they were going to stay on track. We're really excited to see that we're going to have the intersection open again," said Anna Sajeski of clothing store Lobo Mau.

The process isn't over yet for some residents and business owners.

Many people suffered extensive damage worth thousands of dollars.

Water department officials said there are still remaining issues regarding the claims process and that the risk department is working on it.

The goal is to hold a meeting over the next couple of months to update the community, according to the water department.