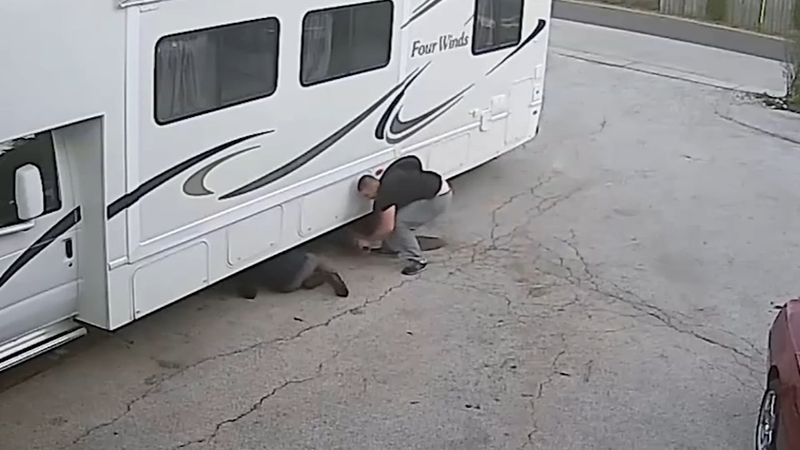 RADNOR, Pennsylvania (WPVI) -- A string of catalytic converter thefts in Delaware County, Pennsylvania has police asking for the public's help.

Radnor police have offered a $1,000 reward for information leading to an arrest and conviction of those responsible.

Betty Lou Norcini and her husband own the auto shop.

They say the thieves can get anywhere from $200 to $700 per converter depending on the number of precious metals inside -- like platinum.

"I not only have to replace the converter, but I have to do the front Y pipe and the rear exhaust because it's a welded system. So this gentleman is out thousands of dollars," said Norcini.

The thefts happened around 5 a.m. on Friday.

"It's not just this crew, it's a problem across the region. I can go on my email and probably 5-10 in the last couple of weeks," said Radnor Police Detective TJ Schrieber.

Police say a third vehicle -- a Toyota Prius -- was also hit just a few doors down from Norcini's.

Investigators released images of the two suspects, and are hoping someone will identify them.

There are ways to help prevent yourself from being a victim:

- You can park along a wall or in between cars to make it difficult for thieves to get underneath your car.
- Park in a well-lit area.
- You can get a converter lock.
- Mark your converter with your name and phone number so when the thieves go to cash in, you can be contacted.
Report a correction or typo
Related topics:
radnor townshiptheftcrime
Copyright © 2022 WPVI-TV. All Rights Reserved.
THEFT
Rise in brazen thefts force convenience stores to close
Van stolen Chinatown church found; search for suspects continues
Upper Darby police search for lottery machine theft suspects
Have you seen them? Video shows suspects steal van from church
TOP STORIES
McCormick sues over counting mail ballots in Pa. Senate race
Man stabbed in Northern Liberties, police say
Fuel saving tips ahead of Memorial Day weekend travel
NMAJH reopens with new exhibits, focus on social issues, racism
3 teens injured in shooting near school in Tioga-Nicetown
Beach patrols preparing for busy season at the Jersey Shore
AccuWeather: Turning Cloudy and Cooler
Show More
NFL QB Dwayne Haskins legally drunk when he was hit, autopsy shows
What's causing liver disease in kids? Researchers float theories
Former Pa. AG sent to treatment after probation violation
Philly musician pays tribute to Korean-American heritage
Nick Foles reunites with Frank Reich, signs with Colts
More TOP STORIES News