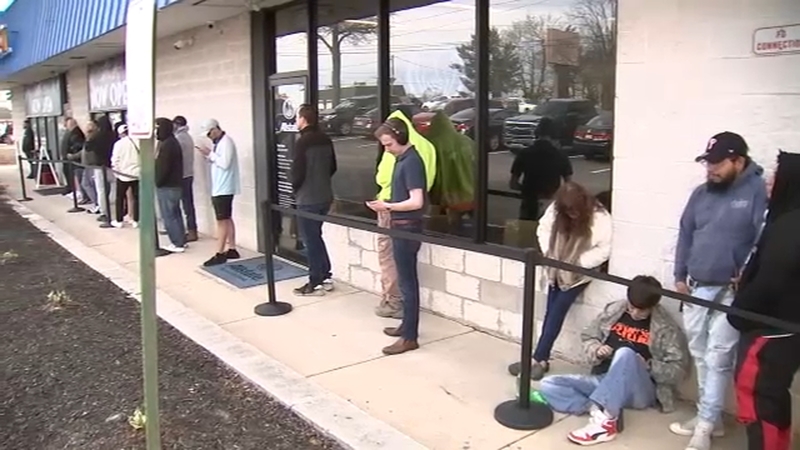 TRENTON, New Jersey (WPVI) -- Recreational sales of cannabis began in New Jersey for adults 21 and over on Thursday morning.

"Thank you, future is here," said former Jets defensive end Marvin Washington, who was the first customer at The Botanist in Williamstown.

For years, Washington has advocated for the medicinal use of cannabis.

Twelve medical dispensaries statewide have obtained licenses to sell to the general public.

At The Botanist, the lines continued to stretch before the 10 a.m. opening.

"I deal with anxiety, and it will help me to calm down. I think New Jersey took a good step," said Arun Nasir of Clayton, who is new to cannabis.

Some waited an hour in the line that was wrapped around Curaleaf in Bellmawr, New Jersey for their first legal cannabis purchase.

Richard Jester, of Williamstown, was first in line at 5:30 a.m., hoping to beat the rush.

"I tried for a medical card, couldn't get it. It cost too much. I'm in a lot of pain, I have a bad back, and I'm hoping to get some relief," said Jester.

The store more than doubled its terminals, brought in additional staff and is actively recruiting more. There will be separate lines and registers for customers with medical cards.

The line at Curaleaf wrapped around the building. Some people were waiting an hour or more for their first legal cannabis purchase.

"We've expanded our hours. We also have dedicated menus," said Sharon Ali, regional general manager for Acreage. "This has been an incredibly historical moment- one that has been a long time in the making."

The line at Curaleaf, in Bellmawr, also wrapped around the building. Some people were waiting an hour or more for their first legal cannabis purchase.

"I don't get excited about too many things but it's nice to be able to do this purchase legally and not have to worry about what you get on the on the streets or illegal market," said Dale Szafran.

"You ain't gotta worry about nobody slipping you nothing. So I'm just here to enjoy it. You know get my smoke on," one man said.

Janisa Holmes waited in line for three hours at Cannabist dispensary in Deptford.

"I spent about $200. It's definitely cheaper on the street, of course, it's just the overall experience being able to get it at your convenience," said Holmes.

As far as pricing - one ounce of cannabis flower ranged from $120 to more than $400 at various locations. Sales tax is higher on recreational products.

Medical cannabis is currently taxed at 2%, but it will be tax free in July.

Recreational cannabis will be taxed at the state rate of 6.625%, plus a third of a percent as a social equity excise fee.

Local municipalities may also choose to tax recreational cannabis up to 2%.

In November 2020, New Jersey voters overwhelmingly approved a ballot question to legalize cannabis in the state, but the start date kept getting pushed back.

Edmund DeVeaux, president of the New Jersey CannaBusiness Association, does not view the changing of dates as delays.

"In the grand scheme of things, it hasn't been delays. We've been very prudent with respect to getting to this point, making sure medical patients, veterans, making sure there's enough supply, that there's infrastructure," said DeVeaux.
EMBED More News Videos

Thirteen medical dispensaries statewide have obtained licenses to sell to the general public. Here's everything you need to know before sales being Thursday.