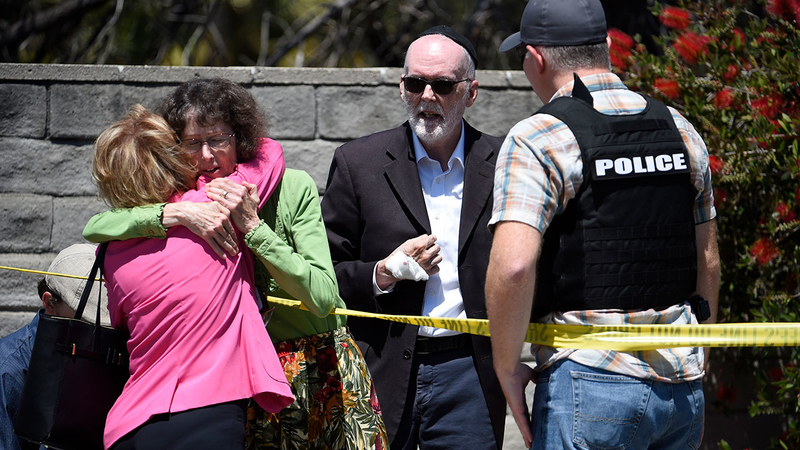 POWAY, Calif. -- Four people were shot, one fatally, when a suspect with an "AR-type assault weapon" opened fire at a San Diego County synagogue, according to local authorities.

The San Diego County Sheriff's Department said in a tweet that deputies were called to the Chabad of Poway synagogue just before 11:30 a.m. local time. The synagogue is in a suburb about 30 minutes north of San Diego.

Law enforcement sources told ABC News the shooting happened quickly. The shooter appears to have fired more than 10 rounds before leaving the synagogue.

The suspect, 19-year-old John Earnest of San Diego, was apprehended by police. An off-duty Border Patrol agent who was in the synagogue opened fire on Earnest as he fled the building, but Earnest managed to escape, authorities said.

San Diego Police Chief David Nisleit said Earnest then called the California Highway Patrol to arrange to turn himself in. Nisleit said the officer who took Earnest into custody clearly saw a rifle in the front seat of his car.

Gore said there were indications that Earnest's weapon malfunctioned during the shooting.

Authorities declined to discuss a possible motive for the shooting. Gore said his agency was working to determine if Earnest played a role in an arson at a mosque weeks before in nearby Escondido. Earnest is not believed to have had any prior contact with law enforcement.

During a Saturday afternoon news conference, investigators referenced social media posts and an open letter attributed to Earnest but did not elaborate on their contents.

Speaking to reporters on the South Lawn of the White House, President Donald Trump said the Poway synagogue shooting "looks like a hate crime" and promised to "get to the bottom of it."

Speaking to reporters on the South Lawn of the White House, President Donald Trump said the shooting "looks like a hate crime" and promised to "get to the bottom of it." Trump offered condolences to those impacted and thanked law enforcement for their work.

The Bureau of Alcohol, Tobacco, Firearms and Explosives and the FBI are on the scene to assist local investigators.

Sen. Kamala Harris of California tweeted that she was "disturbed by reports of a shooting at the Chabad of Poway synagogue and am closely monitoring the situation." U.S. Rep. Scott Peters, who represents Poway, called the shooting "tragic" and said he is "thinking of, and praying for, those hurt and affected."

"Charleston, Pittsburgh, Quebec, New Zealand - now our own Poway, California. No one should ever fear going to their place of worship. Hate continues to fuel horrific and cowardice acts of violence across our state, country and world. It must be called out. CA stands with Poway," California Gov. Gavin Newsom added.

The shooting came on the last day of Passover and exactly six months since a shooting at a Pittsburgh synagogue killed 11 people.

Earlier Saturday, the FBI and Department of Homeland Security issued an intelligence bulletin highlighting concerns based on the Easter bombings in Sri Lanka. The document stressed that no confirmed plot similar to the Sri Lanka attack had been found in the United States but noted that religious institutions and soft targets are attractive to terrorists and incredibly hard to secure.