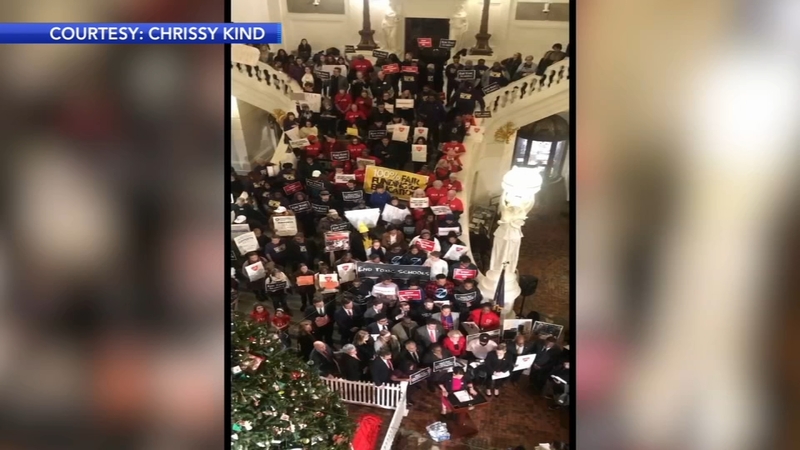 Rally in Harrisburg for healthy schools

They filled the State Capitol Rotunda, holding signs and calling for an end to toxic schools.

Their rally was already scheduled before word came down that a fourth school in the city, Franklin Learning Center in Spring Garden, has to temporarily close due to asbestos.

Grandparent Ernie Bristow of Logan added, "This is an ongoing battle. This is not going to be fixed overnight."

David Loeb of PCCY, which organized the rally said, "The schools themselves are poisoning students and teachers, and I mean that's just the most egregious example of what the lack of funding does."

Sheila E. Johnson of Ogontz attended with her daughter.

"I didn't know the ramifications that I was walking into- putting her into a neighborhood school that is continually failing," Johnson said.

Students from Science Leadership Academy are among those who boarded the bus. SLA was shut for weeks this fall before reopening in a temporary location.

SLA freshman Flora Hernandez also attended Meredith Elementary, where a long-time teacher was diagnosed with a type of cancer linked to asbestos.


"The school that I recently went to for nine years had asbestos and the next thing you know I come to a high school that has asbestos, too," said Hernandez.

Her mother, Robin Hernandez Mekonnen added, "The state has historically cut educational funding incrementally over the years, and it's just gotten to the situation where we don't have enough funding to even take care of the upkeep for schools."

The rally was already planned before news came down Tuesday that Franklin Learning Center is temporarily closing.

Damaged asbestos was discovered in an air shaft that provides heat to the entire building.