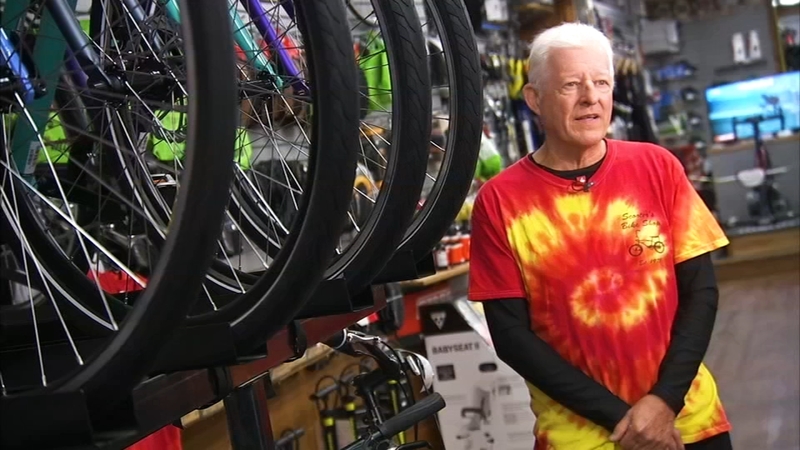 SOUDERTON BOROUGH, Pennsylvania (WPVI) -- Scooter Landes says it was a cross-country bike ride that helped him figure out life after college.

"I had a lot of time to think on six weeks of riding bike," he said. "It was an adventure."

He opened Scooter's Bike Shop in 1975 in Souderton, Pennsylvania.

Landes says he rode bikes his whole life and enjoyed it, so he wanted to share that feeling of joy with others.

"Turning people on to the joys and benefits of cycling is a big part of getting into this business," he said.

Landes says that besides being a fun activity, there are many benefits to cycling too.

"It's a low impact, aerobic activity that people can do late in life," he said.

He says cycling is also great for those with the environment in mind since, "it's a green activity."

The business has evolved over the last few decades and Landes has a bike for everybody and every aspect of riding.

"We carry a full line of Specialized and Cannondale bicycles," he said. "Everything from road bikes to kids' bikes, to family bikes - hybrids."

He says hybrids are good for riding on paved surfaces or gravel trails.

And the latest craze - E-bikes, which are electric, pedal-assist bikes.

He says the Class 3 E-bikes can go up to 28 miles per hour, but are totally quiet, making them a popular choice.

"It's getting people out there that normally wouldn't get out there," he said. "It takes the wind and the hills out of the equation."

He says the appeal of an E-bike is that the rider still has to pedal the bike, but it extends their range.

The shop also carries a variety of accessories, both for repair and safety, to ensure riders are outfitted properly before they hit the road.

His son, Zach, also works in the store with him.

Landes says it's been special to be able to have that kind of relationship with his son.

"We do lots of repairs," he said. "We have three repair stations."

After being in business over 45 years, Landes says it's all about the customers - "treating people right and giving them good products and good service for a fair price."

He says he feels blessed that he's been able to do this for a living in his hometown.