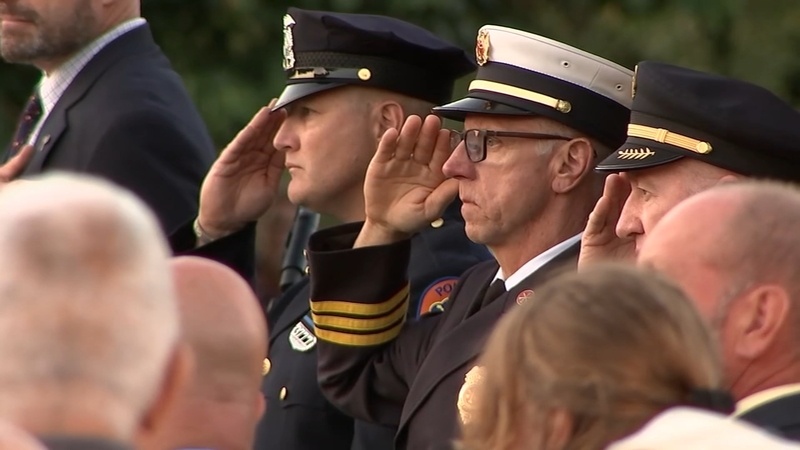 LOWER MAKEFIELD, Pennsylvania (WPVI) -- On Saturday, 9/11 victims from Bucks County, Pennsylvania, were honored in a remembrance of light ceremony.

Bucks County lost 18 residents on September 11, 2001. Among them was a pilot from one of the hijacked planes.

All 18 names were called at the ceremony in remembrance, 20 years later.

"It's a great event we're all together for. An incredible ceremony for 9/11, 20 years," said Cheryl Hood from Langhorne.

"I strongly believe that we should never forget as the mantra goes, and I do everything I can to keep people's awareness and events of 9/11 in their minds forever," said Sliney.

United States Marine Corps Reserve, Colonel Tom Armas, was one of the many first responders at Ground Zero, who rescued as many people as he could.

"We are not going to let this happen again. It's not just a nice event to go to, it means something, and we as Americans have to dedicate our lives to that," said Armas.

ALSO RELATED: How the TSA is still protecting airports 20 years after the 9/11 terror attacks

Patrick Taylor said he was in New York City that day commuting from Bucks County like so many other residents.

"I was driving from Bensalem to New York six days a week," said Taylor.

Many found comfort in the crowd seeing fellow Bucks County residents standing in support. Others traveled from New York City, visiting family in Pennsylvania for the day.

"Remember the past, and look forward," said Nathan Zhao, from Brooklyn.