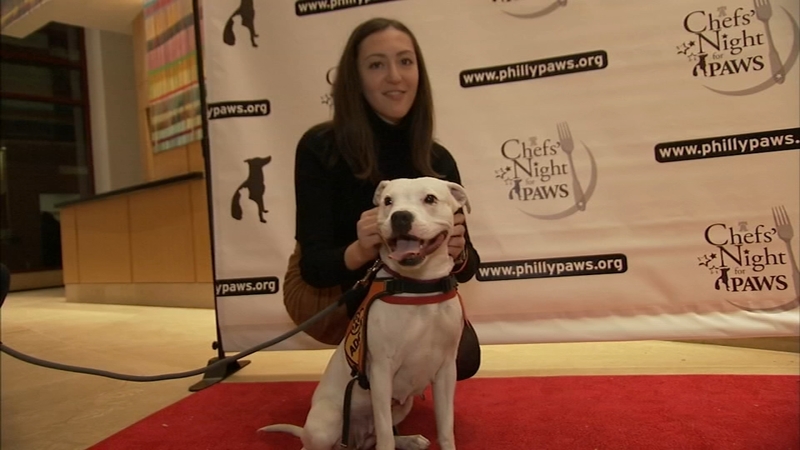 PHILADELPHIA (WPVI) -- Red carpet, glitz and glamour -- all for the animals.

"It's really exciting to be able to mingle with a lot of people throughout the city," says Lauren Campini

The second annual Chef's Night for PAWS set at the Philadelphia Academy of the Fine Arts is the largest fundraiser of the year for the non-profit organization.

"All of the proceeds help PAWS save more animals," says Melissa Levy.

The event brings together about 50 Philadelphia restaurants for the ultimate tasting experience.

"All of the chefs are grouped in the neighborhood where the restaurants are. So you can walk through Rittenhouse and taste some food and drinks from the Rittenhouse Square area, you can visit Midtown and Fishtown and Passyunk," Levy says.

The cause is personal for one couple who adopted a Pitbull from PAWS.

"PAWS rescued her from animal control who was going to have to put her down," says Pauline Abernathy.

The goal is to keep that momentum going.

"Very soon, we think and hope, we reach a time when we can call ourselves a no kill city," says Levy.

Kiki is a mutt between two and four-years-old. She was found as a stray.

"I think she would be great in a house where people are able to give her some exercise," says Allison Lamond.

And can handle some of that puppy energy.

Jack is about four to six-years-old. He was surrendered a few weeks ago because his family could no longer take care of him.

"He's definitely much more comfortable than when he came in," Lamond says.

Winnie is between four and six-years-old and was also found as a stray.