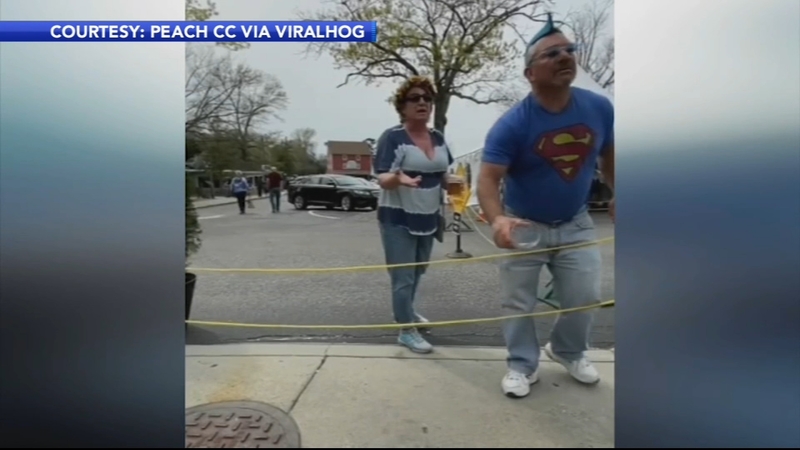 SMITHVILLE, New Jersey (WPVI) -- Video captured the moment a New Jersey school vice principal threw beer at a table of diners who had been filming his wife going on what they called a "transphobic rant" over the weekend.

It happened at Fred and Ethel's Lantern Light Restaurant and Tavern in Smithville, New Jersey.

BreakingAC.com was the first to report the story and identified the couple as Lisa and Michael Smurro of Freehold, New Jersey.

The woman who began recording the video only wants to be identified as Carrie. She said Lisa Smurro could be heard complaining about a transgender woman using the women's restroom.

"She's a man using my bathroom," the woman identified as Smurro is heard saying on video.

The woman can then be heard saying how you are either born male or female.

"There was a man pissing in the women's bathroom," Smurro tells the waitress. "She's a man. She's a man."

The feud ends with the Smurros leaving and Michael Smurro, the vice principal of a middle school in Neptune, New Jersey, tossing beer toward Carrie and her boyfriend.

"I would like to see justice for our LGBTQI+ community, respect for them. I think Lisa and Mike Smurro need to be held accountable for their remarks," said Carrie.

The Neptune School District said in a statement, "This event is troubling as its perception potentially threatens the social-emotional well-being and climate of belonging that our Neptune School District community represents. Although we cannot comment on the details of confidential personnel matters, we can say the Board of Education and Administration are taking this matter seriously."

Tony Coppola, the owner of the Smithville business, said that his staff has been shaken up since the incident.

"We have a diverse staff and I think a lot of them took this personally. All are welcome here and we just ask that you treat one another kindly, and if you can't do that, take your hate somewhere else," said Coppola.

Michael Smurro has since released a statement to the Associated Press stating, "I allowed my emotions to get in the way of my normally sound judgement and reacted in a way that was inappropriate. I do not condone violence or discrimination of any kind and should have simply walked away. I apologize to the person I threw my beer at and wish I hadn't done so. I apologize to anyone I offended."

Galloway Township police began an investigation on Monday. To date, they have not confirmed that there was an incident between Lisa Smurro in the bathroom with a transgender woman, and no one has come forward.

Christian Fuscarino, the executive director of Garden State Equality, did reach out to the Neptune School District. Fuscarino said regardless of whether or not Lisa Smurro did confront a transgender woman in the bathroom, the comments she made spread hate.

"The language that was used is transphobic in nature. It's alarming that people responsible for children would behave in such an aggressive and shameful way," Fuscarino said.

Galloway Township police said the couple could face charges of harassment or assault for throwing the beverage.