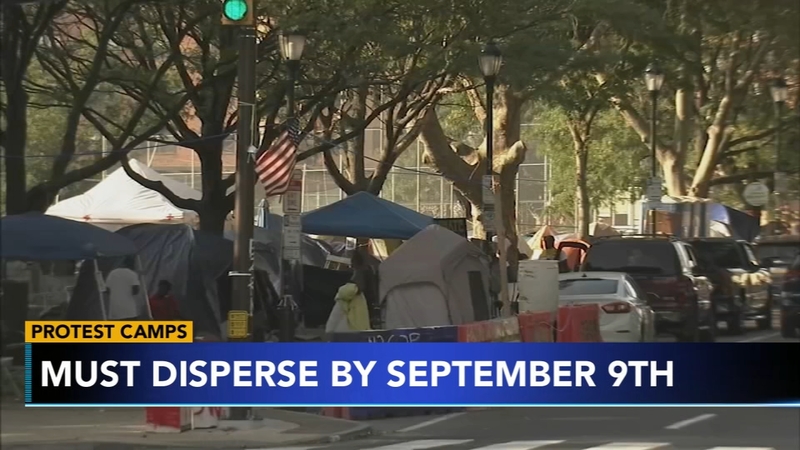 Philadelphia homeless encampments must be cleared by Sept. 9

PHILADELPHIA (WPVI) -- The residents of the homeless encampments on the Benjamin Franklin Parkway and Ridge Avenue must leave the area by Sept. 9 at 9 a.m., city officials announced Monday.

"We have spent nearly three months engaging in good faith negotiations with organizers and those who are living in the camps. We've listened, discussed, and responded to their demands, and I'm proud of a number of actions that are already underway," Mayor Jim Kenney said in a statement.

Kenney said the protests have brought new attention to the magnitude of suffering endured, primarily by Black residents.

"We are committed to working together with homeless people and their many advocates and supporters for policies and programs that will make ending homelessness a reality," he said.

'DISSOLVE AND TERMINATE': A federal judge has ruled that city officials are allowed to "dissolve and terminate" the Philadelphia homeless encampments.

According to officials, actions in response to the demands include, but are not limited to:
- The city established 260 rooms in COVID Prevention Sites, which are hotels, to house individuals who are particularly at risk for COVID, including those 65 or over or with underlying medical conditions.

- Planning is underway for a pilot Tiny House Village.
- The city is establishing a new Rapid Rehousing Program (up to two years of rental assistance) for individuals currently living on the street.

According to officials, new federal funds have been made available to create additional long-term housing opportunities. The city estimates that 900-1,400 new long-term housing units will be created to house people who are currently unhoused, of very low or no income, and/or with disabilities.

As of Aug. 28, 111 people have accepted housing - some at residential treatment centers, some in shelters and others at one of the COVID Prevention Sites, officials said.

The City of Philadelphia has ordered the closure of a controversial encampment of protesters along the Ben Franklin Parkway.

Erected in protest for housing on June 10, the encampment at Von Colln Park has grown to anywhere from 100 to 200 people.