Back in the game: Foles leads Eagles past Rams 30-23 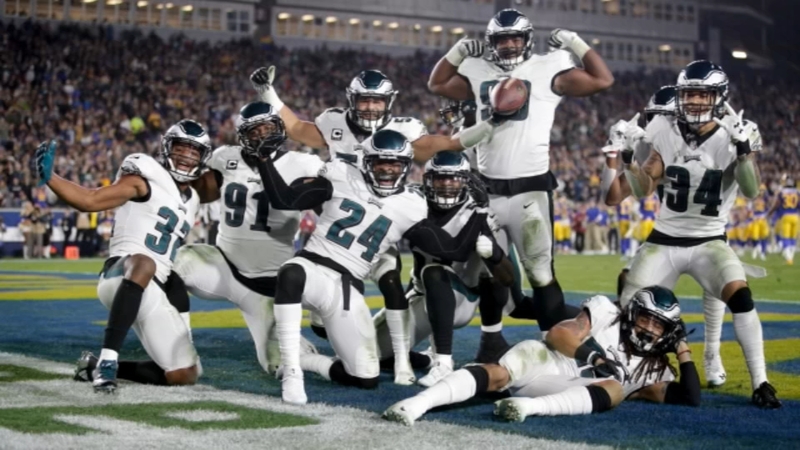 LOS ANGELES (WPVI) -- Nick Foles and the Philadelphia Eagles hope they're about to make another late-season run that begins with another big road win over the Rams.

Foles took over for Carson Wentz and passed for 270 yards, and Wendell Smallwood rushed for two touchdowns in the Eagles' 30-23 victory over Los Angeles on Sunday night.

Rookie Josh Adams also rushed for a score as the Eagles (7-7) kept their playoff hopes alive with a gritty victory over the Rams (11-3), who lost consecutive regular-season games for the first time in coach Sean McVay's tenure.

Foles went 24 of 31 in his first game action since Week 2 in place of Wentz, who sat out with a back injury that could sideline him for the rest of the season. Foles also took over the Eagles at the Coliseum last December, relieving Wentz during a division-clinching 43-35 win and riding that wave all the way to the Super Bowl MVP award and Philadelphia's first NFL championship since 1960.

Todd Gurley rushed for two touchdowns - giving him an NFL-best 21 TDs this season - while catching 10 passes 76 yards. Goff passed for 339 yards with two interceptions in the Rams' first loss at the Coliseum this season.

Philadelphia is the only team to beat the Rams twice in McVay's two seasons in charge.

The Rams already have won the NFC West title, and they still control their destiny for a first-round playoff bye with Chicago (10-4) right behind them.

Although the Rams made a 13-play scoring drive that consumed nearly half of the first quarter, Foles and the Philadelphia offense had three scoring drives in the first half, including a 75-yard march culminating in Adams' TD run shortly before halftime.

The Eagles took a 20-13 lead shortly after halftime with a two-play, 59-yard drive ending in Smallwood's first TD run since Week 3. After a Philadelphia field goal, Goff stumbled with a snap and basically handed the ball to a rushing Corey Graham, who returned the interception to set up a drive ending in another TD run by Smallwood late in the third quarter.

Los Angeles finally mounted an 84-yard drive capped by Gurley's second TD run with 4:06 left, and the defense got a stop - but Natson simply lost control of the ball after catching the punt and making an initial juke.

Foles repeatedly connected with Alshon Jeffery, who had eight catches for 160 yards. Zach Ertz had three receptions to become the fourth tight end in NFL history with 100 catches in a season.

Eagles: DT Fletcher Cox went to the locker room on a cart during the first half with a hip injury, but returned to the field before halftime.

Rams: Gurley missed several snaps in the second half with a knee injury, but returned. His longtime backup, Malcolm Brown, is out for the season, leaving inexperienced Justin Davis and John Kelly as Los Angeles' only other ball-carrying options.

Eagles: Host the Houston Texans on Sunday, Dec. 23. Houston can wrap up the AFC South with a victory.