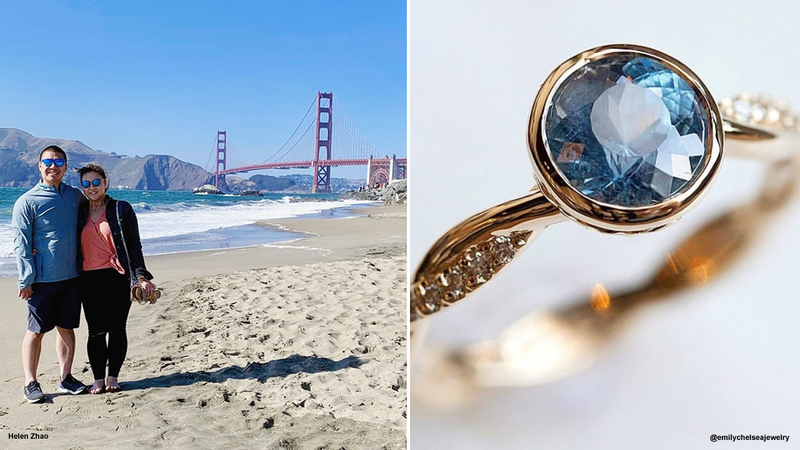 Custom ring stolen from SF tourists but engagement is on

SAN FRANCISCO, California -- Alan Huang of Philadelphia had elaborate plans for his vacation to San Francisco and Yosemite National Park earlier this month. After 14 years of dating, he had commissioned a ring so that he could propose to Helen Zhao during a hike in Yosemite National Park.

Alas, the sapphire ring never made it.

Before checking into their VRBO, the couple parked on 20th Street between Dolores and Guerrero in San Francisco.

Not 'exactly' the wedding proposal either of them expected. #abc7now https://t.co/T2UhSxVnCA

An hour later, they discovered someone had stolen their luggage from the rental car.

"Alan sat on the curb with his head in his hands, distraught," Helen told us. Later, when filing a police report, she learned why. It's hardly the kind of proposal a woman hopes for.

San Francisco police report no progress with the case, though the department cites a 10% decrease in automobile burglaries this year compared with last. Still, that's 13,676 break-ins from January 1 through July 31.

"No one warned us about break-ins," said Helen.

Since returning to Philadelphia, Alan has commissioned Emily Chelsea Jewelry to remake another version.

"It's unique. It's beautiful. My heart broke for them," said Emily Phillippy, who alerted Bay Area jewelers of the theft. "It was a special and distinct sapphire."

"This is a very unique custom ring with a one of a kind sapphire. If any jewelers or gemologist saw the stone, they'd surely recognize it if they had the picture," told Action News.

Despite the theft, Helen and Alan are engaged. He slipped a piece of costume jewelry on her finger as they hiked Yosemite's Eagle Peak.