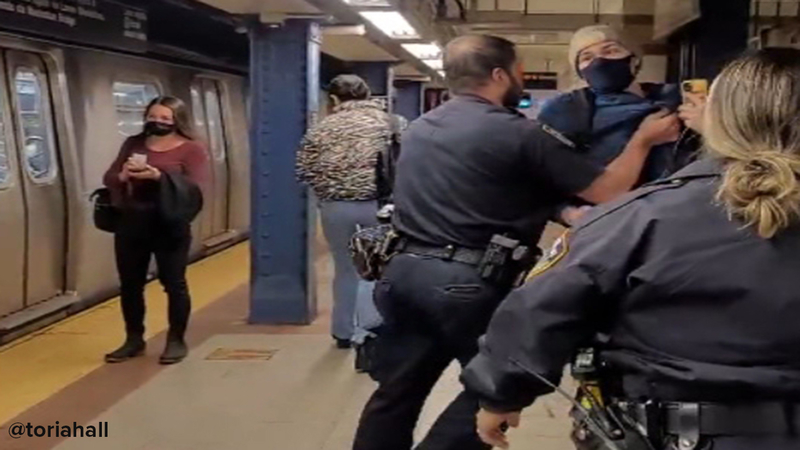 NEW YORK CITY, New York -- Two New York City police officers have been disciplined after a viral video showed them ejecting a rider from a subway station who purportedly hassled them over not wearing masks, according to NYPD Commissioner Dermot Shea.

Shea called the officers' actions "absolutely inexcusable," though he added they would not be fired or suspended.

"There is no excuse for what I saw in that video," he said. "We are better than that."

The incident happened Tuesday morning in the Greenwich Village neighborhood of Manhattan.

The video shows the maskless officers escorting the rider, identified as Andrew Gilbert, from the subway station, and you can hear the officer telling the commuter he is being disruptive.

#NYC #NYPD harassing this subway rider for having the nerve to ask them to put on masks! #notabovethelaw@NYCMayor pic.twitter.com/iEK8qKh0MF

"I've been the first to defend officers, I think many of you know that," Shea said. "I'm also the first to call out wrong when it's wrong...I think the public deserves better than that."

Gilbert sent a statement to WABC-TV telling his account of the events.

"I was just commuting to work, and when I got off the train, I noticed these two officers standing there on the platform with no masks, as is fairly typical these days for the NYPD," he said. "I've taken to filming them whenever I see them doing this in the subway, so I walked over and asked them why they weren't masked. The male officer kept pretending he couldn't hear what I was saying. He told me, 'I can't hear you through your mask,' etc. After a few seconds, another women noticed this and came over and started recording as well. She's the one who posted the video to Twitter that went viral. I kept asking them to follow the law and put a mask on, and the officer declared that I was being 'disruptive' and grabbed me and shoved me 60 feet over to the emergency exit and slammed me through it. He yelled at me, 'If you're not going to ride the train, you can leave.'"

The NYPD has not released details of what precipitated the incident, but the woman who shot the video told Eyewitness News the male officer mocked Gilbert even though she did not believe he was being aggressive or provocative in addressing the officers.

Acting New York Metropolitan Transportation Authority Chairman and CEO Janno Lieber blasted the officers and said it is past time for "more than a few cops" to start complying with mask rules underground.

"We have obviously more than a few cops that are not complying," he said. "Come on. Set an example. You are the people who are responsible for getting everyone to comply with mask wearing and with all the behavior and rules we apply to the public spaces. Come on. It's enough already."

The NYPD said the incident remains under internal review.

"I was troubled by that video," New York Mayor Bill de Blasio said. "I did not like what I saw one bit. I didn't see everything, except for the clip at the time when the person was being removed. I saw the officers not wearing their masks in the subway. That's evident. That's unacceptable. We've given this instruction 1,000 times. If you are going to be in law enforcement, you actually have to participate in following the law."

"I sincerely hope that the two officers who assaulted me are punished as severely as the law allows, but I have no doubt that this isn't going to happen," he said. "When these officers are quietly given a slap on the wrist, it will send a message to all of the other corrupt cops out there that there are no consequences for breaking the law and abusing the public."
Report a correction or typo
Related topics:
societynew york cityface masknypdsubwaycaught on videou.s. & worldpolice officercaught on camera
Copyright © 2021 WABC-TV. All Rights Reserved.
CAUGHT ON VIDEO
Actors honored for rescuing 14-year-old trapped under SUV in NYC
Suspects facing ethnic intimidation charges in SEPTA attack
Aunt speaks out after niece beaten on SEPTA: 'She did the right thing'
Astroworld timeline gives organized view of the disaster
TOP STORIES
Police search for 17-year-old wanted for murder of Temple student
Student shoots, kills 3, injures 8 at Michigan high school
Victim shot multiple times walks to friend's home, dies at hospital
Cop was drinking before killing man, loading body in car: Court docs
Sister of man killed on Thanksgiving: 'We thought it was a balloon'
$20K worth of items stolen from Ulta Beauty store in 40 seconds
Alec Baldwin speaks out on 'Rust' shooting in exclusive ABC interview
Show More
Missing NJ couple found dead in densely wooded area
Relative speaks after South Philly explosion injures 3 family members
Operator of headstone conglomerate appears in court on theft charges
GameStop worker shot during attempted robbery: Police
US moving to toughen testing requirement for travelers
More TOP STORIES News