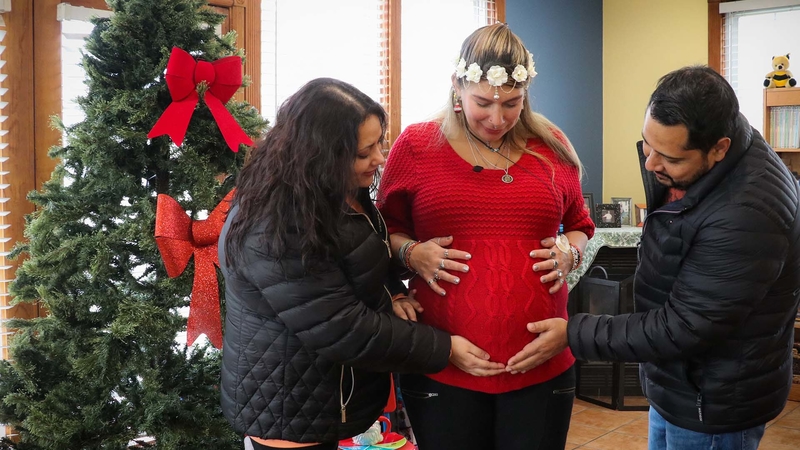 DELRAN, New Jersey (WPVI) -- "Everybody deserves a family if that's what they want," said Victoria Spulock. "Everybody."

The 32-year-old nanny, dog-sitter, and house-cleaner is already a mother to 9-year-old Andrew. But she is just days away from giving birth to another child that shares no relation to her.

"I had a great pregnancy with my son. No complications," she said. "I knew I wanted to be pregnant again but I didn't want any more kids of my own."

Three years ago, Spulock started the long and challenging process of becoming a surrogate mother. Having already successfully given birth once, she was a candidate for the delicate role. Working with the Surrogacy Center of Philadelphia, she endured bloodwork, examinations, and hormonal treatment to start the process.

After she finally got the green light, she was introduced to Anuja Nepal and Bibek Sharma. The residents of Mechanicsburg, Pennsylvania, are originally from Nepal. They married in 2007, but didn't consider having kids until roughly a decade later.

"We thought we were ready to have a child, but you know, I was not getting pregnant," said Nepal. "They did biopsy and I was diagnosed with uterus cancer."

The stunning diagnosis turned their worlds upside-down. And although a hysterectomy expelled the cancer from her body, it also removed her ability to get pregnant.

"I thought you know, this is it," she said. "We were never meant to have a child."

Exploring their options, the couple discovered surrogacy. After developing a budding relationship with Spulock, the plan had been set in motion.

Sharma's DNA was fertilized with a third-party donor's egg. After three weeks, it was placed inside Spulock, where it would grow for roughly 40 weeks. Now, a baby boy named, "Neev," is due any moment.

"Your bun, my oven," joked Spulock. "It's not about me. It's about getting their family at the end result and everything and that makes me happy."

Nepal and Sharma are looking forward to embracing their newborn son during this special time of year.

"It feels like a dream, especially this holiday season," said Nepal. "We're just wanting him to come out any time now."

Meanwhile, Spulock is already preparing to bring another blessing into the world.

"I am very interested in wanting to do this again to help another family," she said. "And the fact that I already am in talks with somebody makes it awesome. I am meant for this. This is my calling."

Decades ago, The Salvation Army helped him. Now, Mr. Bob is giving back by singing and dancing to raise money for a good cause.