"It gives me peace of mind, and a lot of other parents peace of mind," Jennifer Hedberg said.
WPVI
By 6abc Digital Staff and Walter Perez 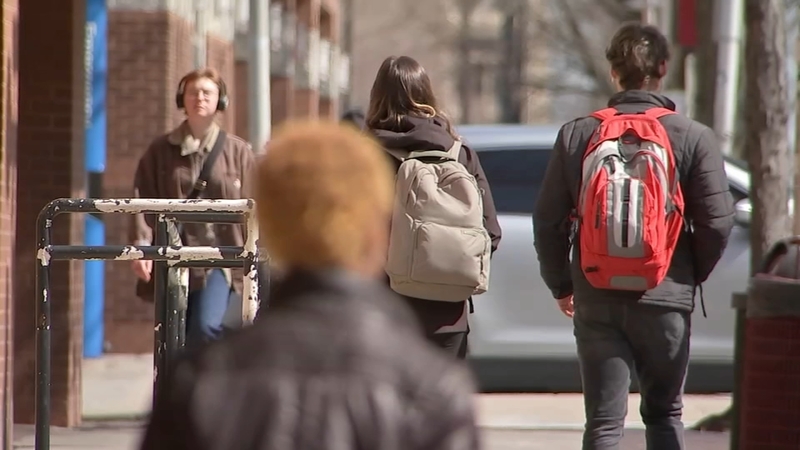 PHILADELPHIA (WPVI) -- Concerned parents are taking matters into their own hands to make sure students at Temple University are safe.

After a rise in gun violence, Jennifer Hedberg and other parents are now paying for their children's private security near the North Philadelphia campus.

Hedberg said she was already aware of the skyrocketing homicide rate, including the murder of Temple student Sam Collington in November.

Then, she received a disturbing phone call from her son, who is a senior at Temple.

"A couple of weeks ago he said there was an armed robbery right outside his house and it was like 5 p.m.," she said.

Hedberg decided to hire a private security firm and start a Facebook group asking if other parents would like to chip-in.

She said the response was overwhelming and dozens of parents jumped on the bandwagon.

And what started as an idea for a private patrol within a few blocks of Hedberg's son's apartment has mushroomed into an account that covers 15th to 19th streets and Diamond to Master streets.


Jasmin Jackson, the owner of JNS Protection Services, said her company's role is to supplement the efforts of the Temple University Police Department by deterring crime and reporting any suspicious activity.

"We want to let them know we are there. We are there to work together, to do what everyone is supposed to do. Help decrease the crime rate," Jackson said.

Officials from Temple sent Action News a statement reading, in part, "The Temple University Police Department has been in touch with the JNS Protection Services patrol officers... We want to help and support their efforts in any way we can."

Hedberg said even if private security offers nothing more than an extra set of eyes on the community, the investment is worth it.

"It gives me peace of mind, and a lot of other parents peace of mind, because it's the only thing I could actually do myself. For me to say, 'I did the best I could, I did something,'" she said.
Report a correction or typo
Related topics:
philadelphiacrimegun violencephiladelphia policetemple university
Copyright © 2022 WPVI-TV. All Rights Reserved.
TEMPLE UNIVERSITY
5 people shot in North Philadelphia near Temple University
Dawn Staley speaks at 6th Annual Philadelphia Coaches Conference at TU
Temple celebrates first in-person graduations since 2019
Man in custody after stabbing in North Philadelphia
TOP STORIES
5 people shot in North Philadelphia near Temple University
AccuWeather: Round of heavy rain overnight
Votes still being counted as Oz, McCormick locked in tight race
Convenience stores closing due to rise in brazen thefts
NJ school nurse saves life of student's grandmother
Delco bus driver accused of taking upskirt photos of students
Singing umpire saves the day with national anthem
Show More
Election Results: Live updates on Pennsylvania primary races
Teen dies after being hit by dirt bike in North Philly; suspect sought
1st monkeypox case in US this year reported in Massachusetts
18-year-old dies after being trapped under sand at Jersey Shore
Biden invokes Defense Production Act for formula shortage
More TOP STORIES News