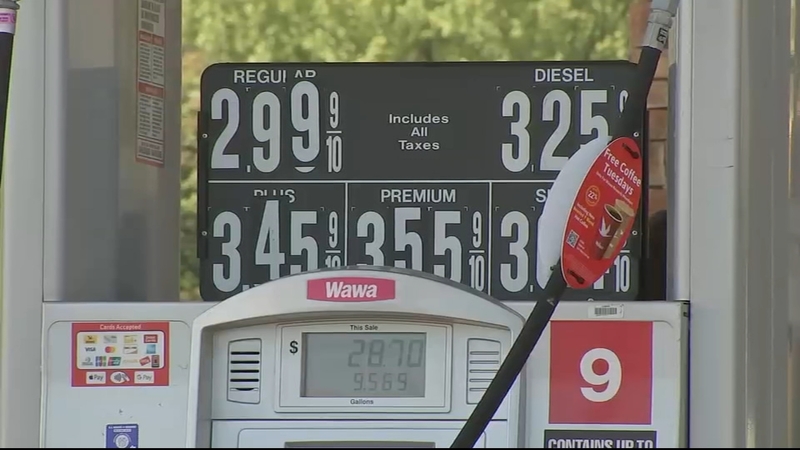 HARRISBURG, Pennsylvania (WPVI) -- Officials in Pennsylvania are monitoring the impacts from the Colonial Pipeline shutdown, but Gov. Tom Wolf said he is expecting minimal impact across the commonwealth.

We’re monitoring potential impacts from the Colonial Pipeline shutdown, but Pennsylvanians should know we are expecting minimal impact in our commonwealth.

There is no need for anyone to stockpile gasoline. Widespread panic buying could result in unnecessary perceived shortages.

Wolf's word of caution comes as panic-buying contributed to more than 1,000 gas stations running out of fuel in the southeastern U.S.

The Colonial Pipeline, which delivers about 45% of what is consumed on the East Coast, was hit on Friday with a cyberattack by hackers who lock up computer systems and demand a ransom to release them. The attack raised concerns, once again, about the vulnerability of the nation's critical infrastructure.

There is no gasoline shortage, according to government officials and energy analysts, but if the pipeline shutdown continues past the weekend, it could create broader fuel disruptions.


The pipeline runs from the Gulf Coast to the New York metropolitan region, but states in the Southeast are more reliant on the pipeline for fuel. Other parts of the country have more sources to tap. For example, a substantial amount of fuel is delivered to states in the Northeast by massive tankers.

"What you're feeling is not a lack of supply or a supply issue. What we have is a transportation issue," said Jeanette McGee, spokeswoman for the AAA auto club. "There is ample supply to fuel the United States for the summer, but what we're having an issue with is getting it to those gas stations because the pipeline is down."

Georgians were also getting squeezed, with 17.5% of stations there out of gas, according to Gasbuddy.com. In Virginia, 17% of stations were out, and in South Carolina, 16% had no fuel.


The national average price for a gallon of gasoline ticked above $3 for the first time since 2016 Wednesday, according to the AAA auto club. Prices begin to rise around this time every year and the AAA auto club said Wednesday that the average price hit $3.008 nationally.
"You go to some states, and you're going to see much higher increases, especially in the South, because that's where you're seeing the largest impact in terms of strain of gasoline, or strain of people," McGee said.

The AAA expects more than 37 million people to travel at least 50 miles from home during the Memorial Day weekend, up 60% from last year, which was the lowest since AAA began keeping records in 2000.