Sisca, 29, was the fire chief for the Trappe Fire Company.
WPVI
By 6abc Digital Staff 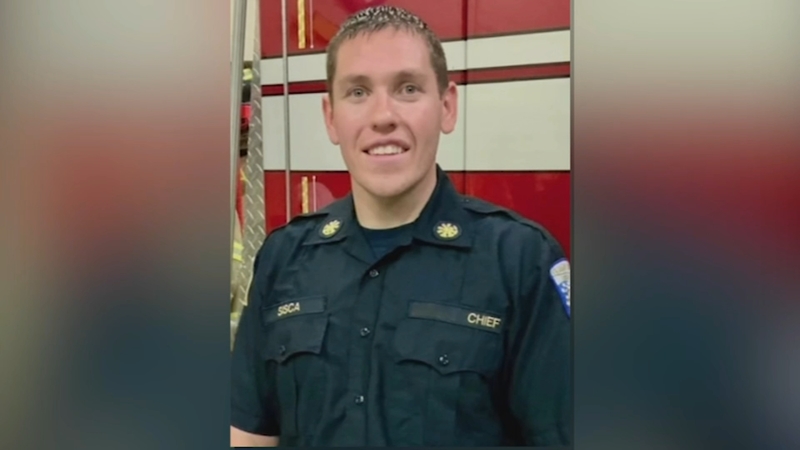 COLLEGEVILLE, Pennsylvania (WPVI) -- The second trooper killed in a crash on I-95 last month was laid to rest on Saturday.

A police procession led the body of Pennsylvania State Trooper Branden Sisca to Perkiomen Valley High School on Saturday morning, where a public funeral was held to honor the fallen hero.

Loved ones of Trooper Sisca gathered for a viewing at Boyd-Horrox-Givnish Funeral Home in Norristown on Friday.

A public viewing was held in Norristown for Pennsylvania State Trooper Branden Sisca who was killed in a crash on I-95.

Sisca and his partner Trooper Martin Mack, along with a pedestrian they were helping, were all killed by a suspected drunk driver on I-95 near Lincoln Financial Field on March 21.

Sisca, 29, was the fire chief for the Trappe Fire Company.

"He was a tireless leader even before he was one of our leaders," said Trappe Deputy Chief John Bolger of Trooper Sisca.

He comes from a family of first responders. His father is a deputy for the Montgomery County Sheriff's Office; his father-in-law and wife are members of the fire company.

He was preparing to become a father in the coming months.

"I'm broken-hearted. It's just not the way life should be," said Chuck Testa, a teacher at Perkiomen Valley Middle School, who remembers having Sisca in class. "Branden was a very jovial. A nice young man. Sometimes had his silly moments, but always a pleasure to have in class."

Sisca enlisted in February of last year and graduated from the 161st cadet class.

On Thursday, it was a somber salute in Bucks County as law enforcement from around the region paid their final respects to Trooper Mack.

Law enforcement officers from across the region came together to say final goodbyes to a friend and colleague.

The 33-year-old father of two girls was remembered as a man dedicated to service and family.

Those who want to support Sisca and his family are asked to consider donating to the Montgomery County Hero Fund.