"I've never seen anything like this, never in my life. It's simply put -- a horror."
WPVI
By Jillian Mele 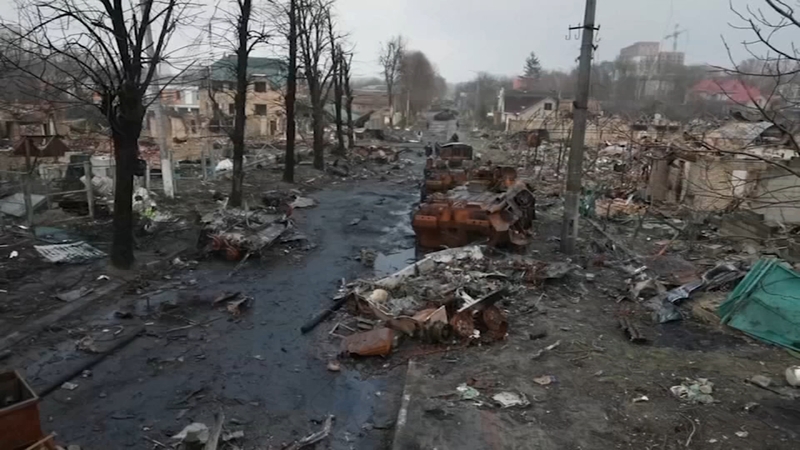 Some of his family is still there, living in a town called Hostomel. The area had been occupied by Russians up until a few days ago.

Pakkel's family lives about five miles from Bucha, the outskirts of the capital of Kyiv, where bodies have been found -- many with hands tied behind their backs, shot at close range, according to Ukrainian officials.

Pakkel translated his family's stories of heartache saying, "They suffered through a lot. There is a lot of dead bodies. Some of the bodies have been buried in the backyards... Then there are cases where people had their hands tied behind their back and they were executed, shot in the head."

Pakkel's brother-in-law has been volunteering to help the survivors of his war-torn town.

"In Kyiv region, where Russian occupied forces were, there are no more hospitals, everything has been destroyed. A lot of infection from shrapnel wounds. People are sick with colds and sinus infections because they have been sitting without heat all this time," added Pakkel.

In western Ukraine, a director of a hospital there who has family in Huntingdon Valley, Pennsylvania, says at least 50 hospitals have been destroyed in the country and many others are damaged. He says every day more refugees are arriving from the east and they need more supplies.

"I've never seen anything like this, never in my life. It's simply put -- a horror. In the last days, the whole world has awakened to the tragedy with the horrors in towns like Bucha," said Yuri Shipov.

Ukrainian President Volodymyr Zelenskyy left Kyiv for his first reported trip since the war began nearly six weeks ago to see for himself what he called the "genocide" and "war crimes" in Bucha.

In his nightly video address, Zelenskyy pledged that Ukraine would work with the European Union and the International Criminal Court to identify Russian fighters involved in any atrocities.

"The time will come when every Russian will learn the whole truth about who among their fellow citizens killed, who gave orders, who turned a blind eye to the murders," he said.