On Thursday, dozens attended several services to pray for loved ones in Ukraine.
WPVI
By Katherine Scott and Annie McCormick 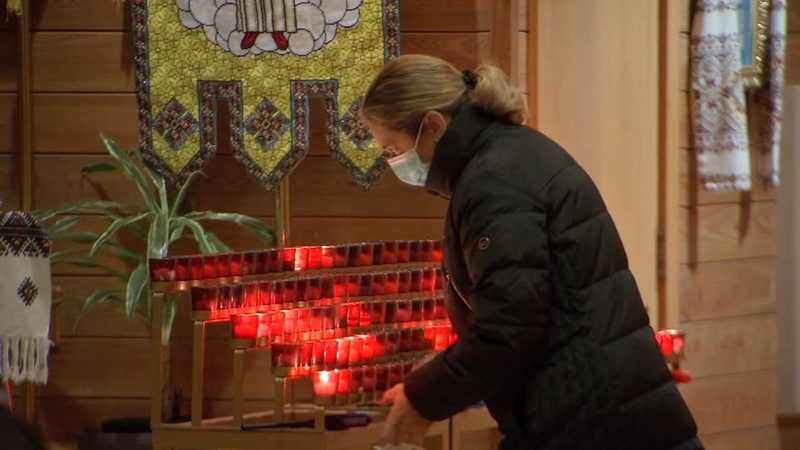 Families in Jenkintown pray for peace in Ukraine

Sofia Sulligan said her grandparents fled Ukraine years ago. Like many, she's stunned at the scope of this attack.

"I mean, I have family that's still there. To me it's more like how is this still happening after all these years?" said Sulligan of Andorra. "I was trying to explain to my 6-year-old son that you literally have an hour to pack everything that you can in the car and get out. What do you pack?"

Bishop Andriy Rabiy was able to reach his brother in Ukraine, who said he is safe.

The plant was the site of the world's worst nuclear accident when a nuclear reactor exploded in April 1986, spewing radioactive waste across Europe.

"Our hope is one and the same: that the strikes will stop. Meanwhile, we have to keep our faith strong," emphasized Bishop Rabiy.

Across the region, people with ties to Ukraine are watching the images of the Russian invasion in horror.

A woman who declined to give her full name said, "We all have our families there. We are so nervous how everything is going to go. So we are praying. We are praying for our Ukraine, for the world to be with us."

At Manor College in Jenkintown, they have many students of Ukrainian descent. It was founded by the Sisters of Saint Basil the Great in 1947. The college is in the midst of its 75th anniversary.

Experts say it could be months until we feel some of the impacts of Russia's attack on Ukraine.

"We are just celebrating our 75th anniversary this year. So it started out as a good year, things have turned since then," said Nicholas Rudnytzky, the dean of academic services. His father immigrated from Ukraine.

Rudnytzky said they have hosted Ukrainian dignitaries since the country became independent.

Manor College is home to the Ukrainian Heritage Studies Center. It's filled with artifacts from Ukraine's culture.

For decades, the college organized a Ukrainian Heritage Festival that became a popular fixture for decades.

Rudnytzky says that preserving the country's heritage is more important than ever.

"In 1991 when Ukraine became independent, many asked why keep these organizations? Why keep the traditions and the heritage? This is a reminder to this generation that has never known anything different that this can be taken away," Rudnytzky said.

"Our hope is one in the same, the strikes will stop. The war, that it will stop, and meanwhile we have to keep our faith strong," emphasized Bishop Rabiy.