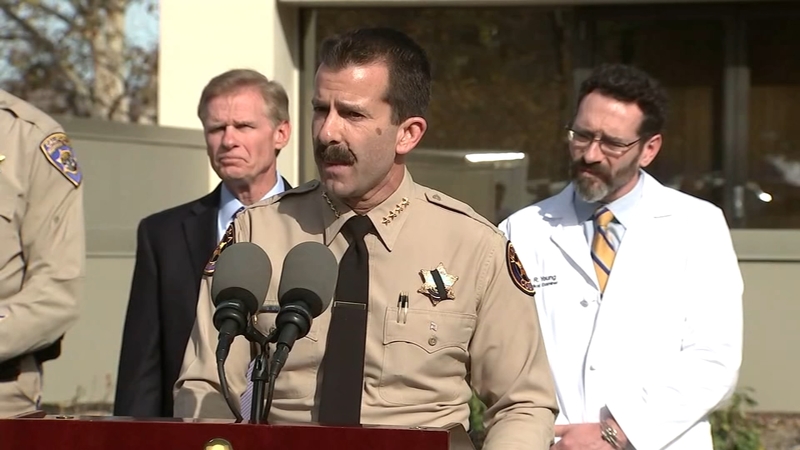 THOUSAND OAKS, Calif. -- Investigators said Tuesday that the number of victims from a shooting at a country music bar in Southern California this month could have been much higher based on the amount of ammunition the gunman carried.

But authorities said they were no closer to figuring out why 28-year-old Ian David Long killed 12 people than they were the day of the Nov. 7 attack.

There is no evidence Long was radicalized or that he was targeting an ex-girlfriend at the Borderline Bar and Grill in the Los Angeles suburb of Thousand Oaks, investigators said at the first news conference since the week of the shooting. Officials had said they were looking into the possibility that he was targeting her.

Long, who killed himself, posted on social media about whether people would think he was insane.

He fired more than 50 rounds during the shooting, using a .45-caliber semiautomatic pistol, but he had seven 30-round high-capacity magazines with him, Ventura County Sheriff Bill Ayub said.

Five of those magazines, or 150 bullets, had not been used, he said. Such magazines are illegal to buy and possess in California but can easily be purchased in neighboring states.

Ayub also revealed that Long had a folding knife with him, and a coroner's official said one victim had been stabbed in the neck, in addition to having several gunshot wounds.

Attached to Long's gun was a flashlight with a laser sight, and Long threw multiple smoke grenades into the crowd during the shooting, "which contributed significantly to the chaos and confusion inside," Ayub said.

When sheriff's Sgt. Ron Helus and a California Highway Patrol officer responded within minutes of 911 calls, Long was ready, and ambushed them from a position of tactical advantage, Ayub said. Helus was among those killed, though neither of the officers' bullets hit Long.

Investigators have interviewed hundreds of witnesses and gathered bullet casings, surveillance video and other evidence from the scene of the shooting, as well as seized items from Long's home, including digital media, said Paul Delacourt, assistant director in charge of the FBI's Los Angeles field office.

Most of the evidence taken by the FBI is at its lab in Quantico, Virginia, for analysis, Delacourt said.

Detectives hope items from the house help them learn why Long carried out the attack and that evidence from the bar better explains how he carried it out.

"There's a process of both interviewing the people and getting the information investigators obtain and consolidating those to develop a timeline, and if we can discover what the motivation was for this attack," Ventura County sheriff's Capt. Garo Kuredjian said. "They've been doing that pretty much around the clock since it happened."

Their work persisted in spite of a wildfire that erupted just hours after the shooting, forcing FBI investigators and local sheriff's detectives to evacuate.

"They didn't miss a beat," said Kuredjian, who also had to flee.

Long, a former machine gunner and Afghanistan war veteran, attacked the bar on a busy weekday night,firing into the crowd as somehurled barstools through windows to escape.

Neighbors said Long made them uncomfortable and even called 911 on him in April. Responding deputies found Long behaving angrily and irrationally, but a mental health specialist who met with him didn't feel he needed to be hospitalized.

Two of Long's former high school track coaches described his behavior during his teenage years as aggressive and disturbing.