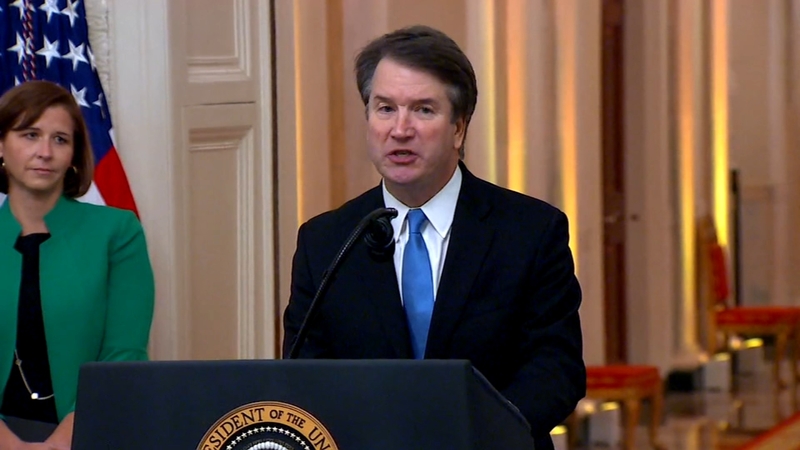 WASHINGTON -- Brett Kavanaugh took the bench with his new Supreme Court colleagues for the first time Tuesday in a jovial atmosphere that was strikingly at odds with the tension and rancor surrounding his high court confirmation.

The new justice dived into his new job, asking a handful of questions in the first arguments of the day following a traditional welcome from Chief Justice John Roberts, who wished Kavanaugh "a long and happy career in our common calling."

Kavanaugh took his seat at the end of the bench to Roberts' far left just after 10 a.m., a visible manifestation of a moment that Republicans have dreamed of for decades, with five solidly conservative justices on the court, and Democrats have dreaded.

His path to confirmation was turbulent - opposition to him intensified after Christine Blasey Ford accused him of sexually assaulting her, allegations Kavanaugh denied.

In court, Kavanaugh asked questions of both sides in arguments over increased prison sentences for repeat offenders. He jumped in with his first question after most of the other justices had spoken.

Questions from Kavanaugh and Justice Neil Gorsuch, President Donald Trump's two high court picks, suggested they could vote against the Trump administration and side with a criminal defendant from Florida who is fighting an increase in his sentence from just over six years to possibly more than 15 years.

There were no disruptions in the courtroom and the justices laughed at each other's jokes. Justice Sonia Sotomayor even appeared to playfully pinch Gorsuch's arm as she asked a question about the kind of physical force necessary to have a crime be treated as violent under a federal enhanced sentencing law.

The newest justice's wife and two daughters were in seats reserved for justices' guests, along with retired Justice Anthony Kennedy. Kavanaugh replaced Kennedy on the bench.

The 53-year-old Kavanaugh occasionally chatted privately with his seatmate, Justice Elena Kagan. From time to time, he put on reading glasses to refer to papers in front of him.

There was a long line of people hoping to see Kavanaugh's first appearance. Police put up barricades in front of the court, but there were few protesters in the early morning.

Those who were there held signs saying, "We will not forget" and "We do not consent," following the acrimonious fight that culminated in Kavanaugh's 50-48 Senate confirmation Saturday.

Kennedy's presence in the courtroom underscored the changing of the guard on the bench. Kennedy was a more moderate conservative who sometimes sided with the court's four liberal justices. Kavanaugh, in contrast, is expected to be a more decidedly conservative vote, tilting the court right for decades and leaving Roberts as the justice closest to the ideological middle.

Republicans had hoped to confirm Kavanaugh in time for him to join the court on Oct. 1, the start of the new term. Instead, the former D.C. Circuit judge missed the first week of arguments as the Senate considered an allegation that he had sexually assaulted a woman in high school, an allegation he adamantly denied.

Kavanaugh has had busy days since he was confirmed Saturday. That evening, he took his oaths of office in a private ceremony at the Supreme Court while protesters chanted outside the court building.

And on Monday evening he was the guest of honor at a ceremonial swearing-in at the White House. While Trump apologized on behalf of the nation for "the terrible pain and suffering" Kavanaugh and his family had suffered and declared him "proven innocent," the new justice assured Americans that he would be fair and was taking the job with "no bitterness."

The other eight justices also were at the White House on Monday.

Kavanaugh has also begun moving into his new office at the Supreme Court, taking over space previously used by Justice Samuel Alito, who moved into offices vacated by Kennedy. Kavanaugh has also hired four clerks, all women, the first time that has happened.

On Wednesday, the only other day of arguments this week, the court will hear another two hours of arguments. One of the two cases the court is hearing then involves the detention of immigrants, an issue on which Kavanaugh's vote could be key.

Though he missed the court's first week, none of the six cases argued dealt with blockbuster issues. They included a case about a potential habitat for an endangered frog and another about an Alabama death row inmate whose lawyers argue he shouldn't be executed because dementia has left him unable to remember his crime. Kavanaugh won't vote in those cases, but if the court is split 4-4 it could decide to have those cases re-argued so Kavanaugh can break the tie.

As the newest member of the court, Kavanaugh will take on a few special jobs. He will take notes for the justices when they meet for private conferences. He'll also be the one to answer the door at those meetings if someone knocks to deliver something such as a justice's coffee or forgotten glasses.

He'll also sit on the committee that oversees the court's cafeteria, which is open to the public. Roberts has previously said that assignment is a way of bringing a new justice "back down to Earth after the excitement of confirmation and appointment."