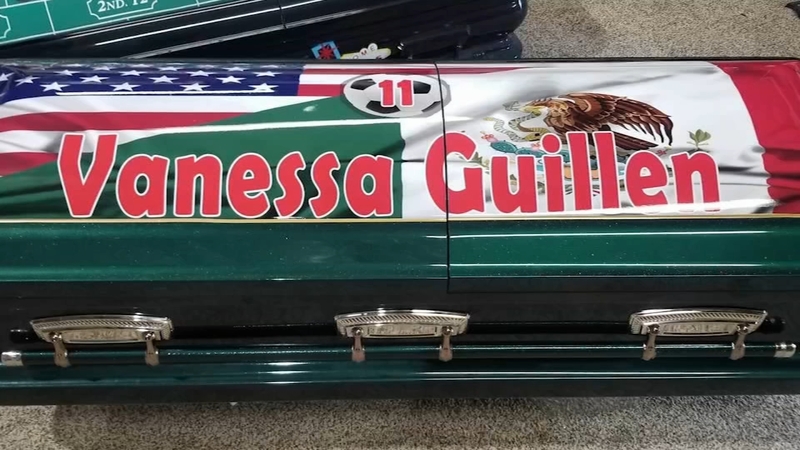 HOUSTON, Texas -- Vanessa Guillen's casket, which was carried into her high school's auditorium for her public memorial, was custom-made, donated by the same person who designed one for the victim of another tragedy.

Ganem said he worked with Guillen's family to create the custom casket, which features Guillen's favorite color, combined with the Mexican and American flags, and the Virgin Mary, which reflects the family's Catholic faith.

"We try to bring light to a dark time in what we do," said Ganem. "I don't want this to be swept under the rug. I think with everything going on with the pandemic and everything else that is happening right now, I think this deserves just as much media coverage to show what this young lady did for us."

Last year, he donated a casket to the family of 4-year-old Maleah Davis.

Family members of Guillen in Mexico will be able to travel to Houston to attend the funeral of the Fort Hood soldier.

Guillen's grandmother and six of her aunts and uncles obtained humanitarian visas to travel to Houston for the service.

The Secretaria del Zacatecano Migrante shared photos through Facebook saying they were grateful for the coordination efforts between the American and Mexican governments to make this trip possible.

Congresswoman Sylvia Garcia says she worked with the Mexican ambassador to help the Guillen family say their final farewell to the Army specialist who was murdered on Fort Hood. Guillen's body was found months after she was reported missing.

Aaron David Robinson, a 20-year-old Army Specialist, was identified as the person of interest in Guillen's case. She disappeared in April. Robinson died by suicide when authorities made contact with him, according to special agent Damon Phelps with the Army's Criminal Investigation Command.

In an emotional sit-down interview, Vanessa Guillen's mom, Gloria, had a strong message for the Army.

Cecily Aguilar, 22, a civilian suspect in Guillen's case has been charged with one count of conspiracy to tamper with evidence. According to police, she told investigators she was asked to help hide a body.

14 Fort Hood soldiers fired or suspended over violence at base