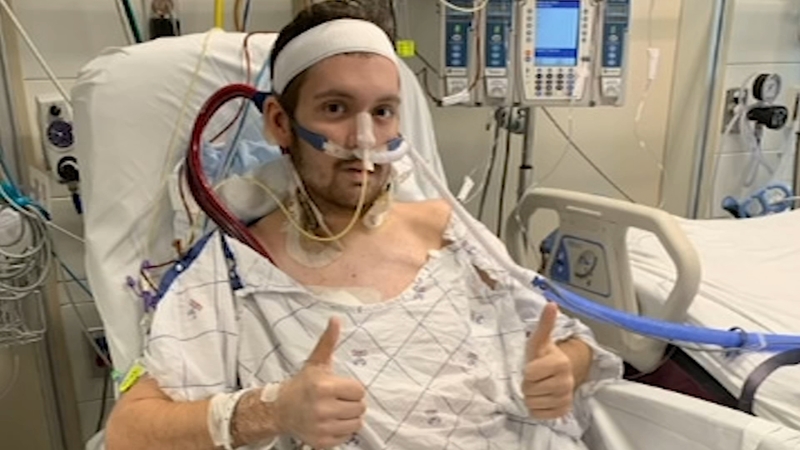 PHILADELPHIA (WPVI) -- The Centers for Disease Control and Prevention are investigating an outbreak of vaping use that is associated with lung injury, especially among young people.

Nineteen-year-old Kevin Boclair is getting his strength back after spending months in the hospital this summer.

He says it started with a cough, night sweats and fatigue.

"But then once I was in the hospital, like, everything just went downhill so quickly," Kevin said.

His parents say Kevin had to be resuscitated and then put on a machine to help him breathe. He spent two weeks in a coma and doctors said he may need a double lung transplant.

Kevin's dad Len says it was an emotional roller coaster.

"My gut reaction was he was dead. He looked dead, lying there in that bed, he looked dead. No parent should ever have to see that, ever," Len said.

Kevin was one of now more than 2,500 diagnosed with a serious lung injury related to vaping. Fifty-five people have died.

Dr. Frank Leone, a pulmonologist with Penn Medicine's Smoking Treatment Program, says vaping is a problem of epidemic proportions with 60-percent of high schoolers at least trying it.

It can cause lung injury and other issues in the future.

"Nicotine has the ability to change the structure and function of those brain cells, alter the pattern of connections, making some outcomes more likely than if you were never exposed to the nicotine," Dr. Leone said.

Dr. Leone says the problem is it is very difficult to get people to quit using nicotine, adding that nicotine is "virtually king of addictive substances."

Kevin says he got hooked when he was 17. He tried to quit several times but failed.

"It was a lot more like a mental withdrawal. Like, I just was thinking about it constantly and always like I need to get a hit of vape," Kevin said.

Today, he feels fortunate. His lungs finally started to heal.

He shares his story hoping it will spark others to think twice about vaping.

Kevin's mother Debbie is still brought to tears, thinking about what could have happened.

"Thanksgiving was very different this year. After we said grace, I looked around the table and thought: if he wasn't here I don't know what I would've done," Debbie said, adding she hopes all kids stop or don't start vaping. "It's like Russian Roulette. You don't know which kids are going to be affected or not."