The 2.5-mile road is the primary east-to-west corridor in South Philly, but new plans to repave it are still raising questions.
WPVI
By Corey Davis 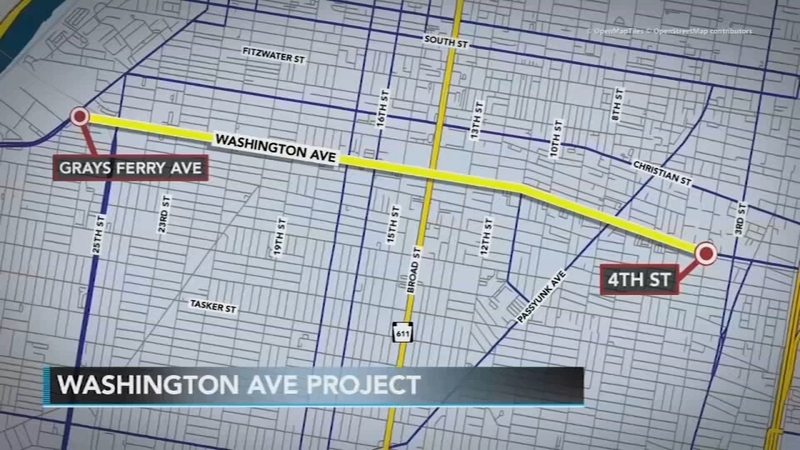 PHILADELPHIA (WPVI) -- The City of Philadelphia will move forward with a revised plan to repave and reduce lanes along Washington Avenue and begin construction this year.

The 2.5-mile road is the primary east-to-west corridor in South Philadelphia, but new plans to repave it and take out lanes are still raising questions.

The initial plan was to shrink Washington Ave. from five lanes to three from Grays Ferry Avenue to 4th Street, according to the Philadelphia Office of Transportation, Infrastructure, and Sustainability (OTIS).

The talks with the community have been happening since 2020 - delayed and later restarted last year.

The city recently announced that it is now switching the plan after getting strong opposition.

Washington Ave. will now have a mixed layout, where some sections will be three lanes and others will be four, according to OTIS.

In previous years, dozens of accidents, many involving pedestrians have happened on the road.

City officials said the goal is still to improve safety by allowing more space for bicyclists and pedestrians.

But there are groups and strongly-worded social media comments where people argue that the original three-lane plan was the safest option.

Looking ahead, the city is requesting studies to install automated red-light cameras at key intersections in partnership with the Philadelphia Parking Authority.

They're also planning to look into requests for studies on speed cushions on residential streets near Washington and will install them where appropriate, according to OTIS.

The city will host a public open house on Tuesday, March 1, at 6 p.m. for those interested in seeing the finalized plans before construction begins.

No location has been announced yet.