The challenge of cost to stay open prior was compounded fines Woodall faced from the City of Philadelphia.
WPVI
By TaRhonda Thomas and 6abc Digital Staff 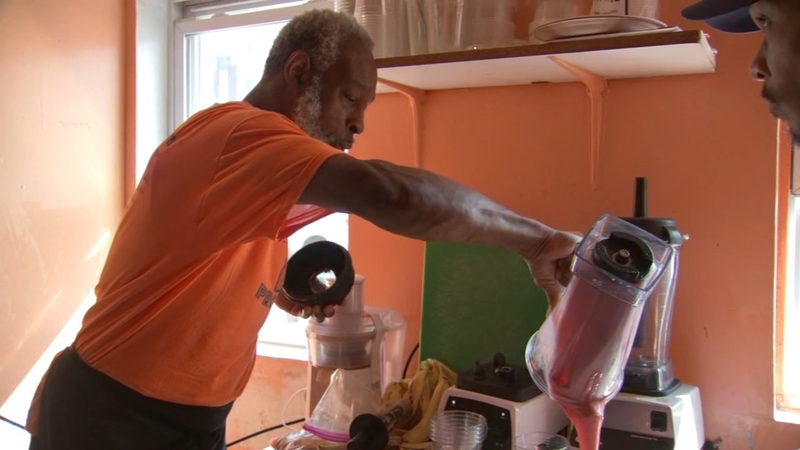 PHILADELPHIA (WPVI) -- It's something that's hard to find in West Philadelphia: fresh produce.

And it got even more difficult after a local store was forced to close its doors.

On Friday, they reopened with a renewed mission and new challenges.

Woodall does so with ease since he's done it many times before.

It showed among the group of people who gathered for free smoothies late Friday morning.

The people who gathered at West Phillie Produce on 18 S. 62nd Street were there to celebrate the produce store's grand reopening.

It's a resource that people in the community are happy to have back.

"We have the most affordable food and produce store in West Philadelphia," said Woodall, who founded the store 12 years ago. "Most of the City of Philadelphia is a produce desert."

Woodall says he has always had a mission to educate people on healthy food and make those foods more accessible. But, these days, getting fresh food into West Philadelphia is harder.

"It's very expensive, and the prices are rising," he said.

The challenge of cost to stay open prior was compounded fines Woodall faced from the City of Philadelphia.

That's why Woodall says the doors of his business closed for four months.

"There's been little to no support from the City of Philadelphia," he added.

But some local partner organizations stepped in to connect community members to healthy food, including free produce that the store gives away daily.

Woodall has gotten support from companies including AT&T, which presented West Phillie produce with a check for $2,500 Friday.

The company that makes Knorr pasta dishes also featured Woodall in a national advertisement that has racked up nearly a million views on YouTube.

The national recognition has gotten Woodall noticed by other cities.

"We've got six other cities asking us to come to their city and bring this model to their city," said Woodall.

Even though other cities are calling him, Woodall feels a calling to stay in West Philadelphia, where his store has become a safe haven.

"We bring solutions. Positive solutions to the community," he added.