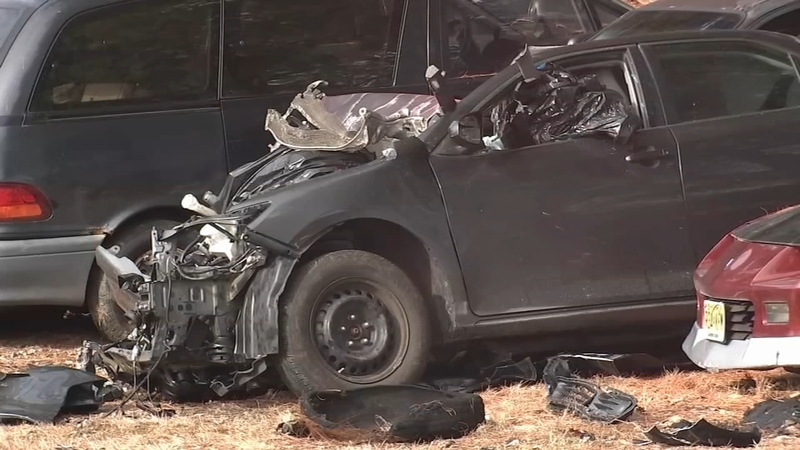 WEST WINDSOR, New Jersey -- Dash camera video from a New Jersey police vehicle captured the moment an Amtrak train slammed into a car belonging to an alleged drunk driver who had gotten stuck on the tracks.

It happened just before midnight Tuesday underneath the Route 64 Bridge just north of Washington Road at the Princeton Junction Train Station in West Windsor.

They say the vehicle had been driven by 23-year-old Amna Ahmed, who was at the scene along with her father and sister, who had arrived to provide her with assistance and were parked on an access road next to the train tracks.

Despite efforts to stop all train traffic in the area, police say a westbound Amtrak train approached at a high rate of speed as officers and the family scrambled for cover.

The train destroyed the Toyota and sent debris flying toward the area where the officers had just been standing.

No injuries were reported, but the incident disrupted traffic in the area for hours.

"I think the big question is: what was she doing there? How did she even get onto the tracks? It doesn't make any sense," said Jose Salinas who works nearby.

Authorities said Ahmed was determined to be intoxicated at the scene and was issued summonses for reckless driving and DWI.

"These kids," said Mara Puglise, a business owner near the Princeton Junction station. "Like - poor parents. When they receive a phone call it's like, these kids go out, they get drunk, they don't understand it's very dangerous."

The tracks were re-opened in time for the morning rush.

Police encourage everyone to stay away from the train tracks, and if you do end up stuck on the rails 911 should be your first call.