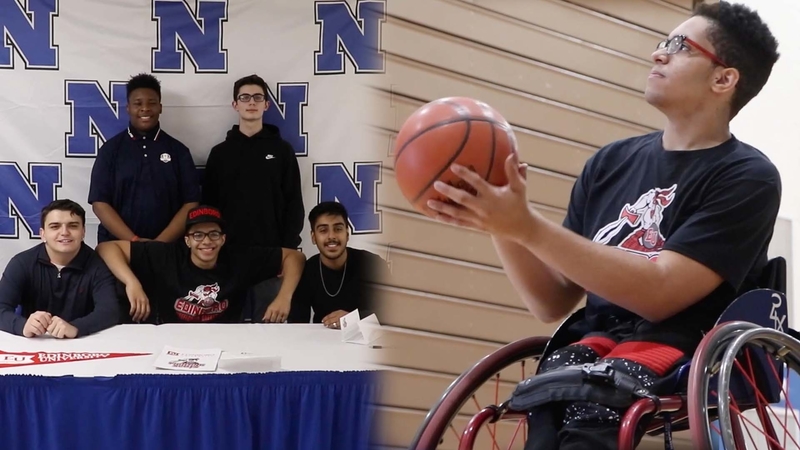 NORRISTOWN, Pennsylvania (WPVI) -- "I've always wanted to play sports and never really found anything because of my disability," said Jordan McCown. "But wheelchair basketball, like, came to me and I was like, this is something I want to do and I wanted to practice it and I wanted to be the best that I could be."

"Basically, I was just born without the lower part of my spine, so I have to use crutches to get around," he said. "I live a normal life, pretty much."

McCown discovered wheelchair basketball by watching Disney Channel when he was 9 years old. Later, he joined Katie's Komets, a co-ed team from Philly which is a member of the National Wheelchair Basketball Association. He then attended camps at Edinboro University, located in the northwest corner of Pennsylvania.

"I've looked at other colleges throughout the time but always came back to Edinboro because, like, I felt at home there every single time I'd go there," he said.

Luckily for McCown, his skills netted him a scholarship at the university. Today, he signed a letter of intent alongside his family and friends.

"Day he was born, I said he was a champion. I mean it. I still believe that," said Michael McCown about his son. "I love seeing his achievements and his accomplishments and he's always been my superhero."

Jordan McCown hopes to score a championship for Edinboro University once he joins the team. His ultimate goal is to play in the Paralympic Games and earn a gold medal. And overall, he hopes to raise awareness for an inclusive sport that brings people with similar life experiences together.

"It's a great opportunity for anybody who wants to play basketball," he said. "You can go far."

Almost every fourth grader at this elementary school in Cherry Hill can solve the classic puzzle in less than 10 minutes.