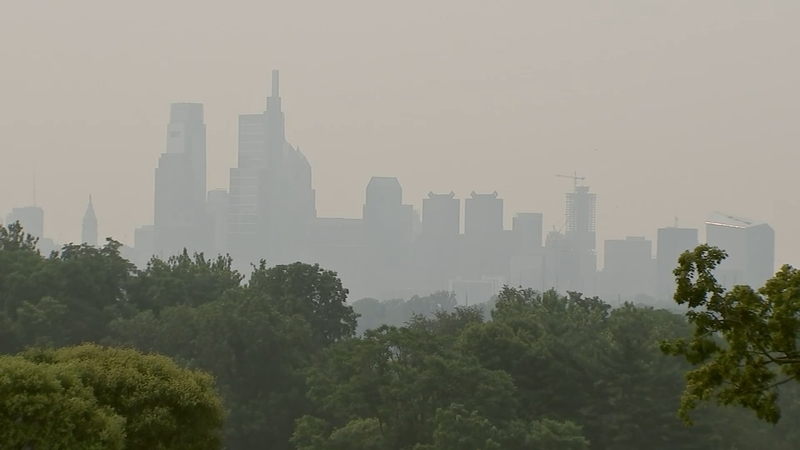 PHILADELPHIA (WPVI) -- The primary contributor to the haze over the Delaware and Lehigh valley is the raging wildfires across the western U.S. and Canada.

An Air Quality Alert is in effect today, thanks to smoke from those western wildfires filtering into our region. It's also hot and more humid with a high of 91. A stretch of comfortable weather arrives soon. Details on @6abc this morning. Have a nice Tuesday! pic.twitter.com/9uMOUkCh6Y

The smoke from those fires is rising into the jet stream and traveling all the way to the East Coast where it's settling toward the surface.

The upshot is an increase in fine particulate matter forcing state and local health officials to issue a Code Orange Air Quality alert.

Young children, senior citizens and those suffering from heart and lung conditions should limit outdoor exposure.

An Air Quality Alert has been issued due to smoke from the western wildfires.

State health officials say the rest of us should not take it lightly either.

"Particulate matter is the term for a mixture of solid particles and liquid droppings found in the air so these are definitely things that are breathable that people can inhale and you know that causes a lot of stress on a person's lungs and well-being and overall health," Jamar Thrasher, Pennsylvania Department of Environmental Protection Press Secretary, said.

Future tracker indicates the smoke will be with us through Wednesday afternoon.

Finally, a front will come in later in the day and shove the smoke out of the area.

Most of the time when we issue an Air Quality Alert it's because of pollution and considered an Ozone Day. But this time, it is because of the smoke.

Those in sensitive groups are told to limit their outdoor activities due to the smoke.

Otherwise, we are looking at hazy sunshine for Tuesday. The high is 91 for Philadelphia.

The threat of thunderstorms and lightning has prompted officials in fire-ravaged Oregon to ask for help from outside the Pacific Northwest to prepare for additional blazes as many resources are already devoted to a massive fire in the state that has grown to a third the size of Rhode Island.

The 537-square-mile Bootleg Fire is burning 300 miles southeast of Portland in and around the Fremont-Winema National Forest, a vast expanse of old-growth forest, lakes and wildlife refuges. Evacuations and property losses have been minimal compared with much smaller blazes in densely populated areas of California.

But eyeing how the Bootleg Fire - fueled by extreme weather - keeps growing by miles each day, officials with the Rogue River-Siskiyou National Forest in southwest Oregon are asking for more outside crews to be ready should there be a surge in fire activity there.