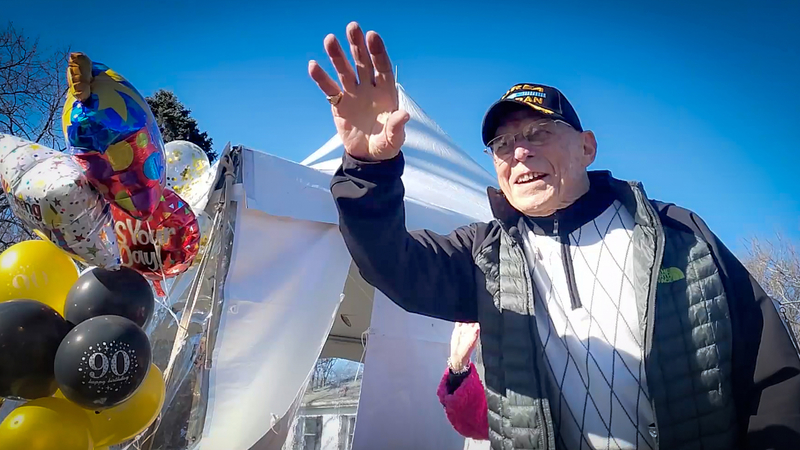 BROOMALL, Pa. (WPVI) -- "Best day of my lifetime. I can tell you that," said Danny "Pops" Aquilino after a 20-minute long birthday parade that drove by his house.

The Korean War Veteran was only expecting a few family members to celebrate his 90th birthday. Then, he heard the siren of a police car.

"I can't believe this," he said, as friends and family from across time and space zoomed by his driveway in a seemingly endless caravan.

Aquilino's children think the overwhelming turnout is a natural response to a life full of faith and service.

"Whenever there's someone in need in any way, shape or form, even when we were kids growing up in the city, my dad's there," said Bob Aquilino.

His whole family repeats a famous catchphrase that Pops taught them at a young age.

"It doesn't cost nothing to be nice," said Pops. "Nothing at all."

"He's lived his whole life by that theory," said Joanne Forcina, Pops' daughter. "He has drummed into us since we were little kids."

Pops once worked as a steamfitter before taking his post as the maintenance man at the Saint Cabrini Home in New York.

Before that, he served in the U.S. Army during the Korean War. Three of his brothers also served, including one who lost his life overseas.

"We all did what we had to do and that was it," said Pops. "There were men them days."

Yet, Pops is grateful for a life well-lived. He dearly misses his wife of 64 years, Peg Aquilino. He has 12 grandchildren and soon-to-be five great-grandchildren. His sister, Angie, visits frequently even during the pandemic.

"He's my family historian," she said. "Whenever I have a question, he's the one I ask. And he always has the answer."

Looking back on a surprise orchestrated by dozens of people, Pops was left nearly speechless.

"They know I love them very much. I don't have to say more than that," he said. "They're always in my heart and, when I go, they'll be in my heart."

RELATED: Cape May community steps in to send off Coast Guard training graduates

Flag-waving locals stepped in to celebrate Coast Guard training graduates whose families can't be there due to the pandemic.