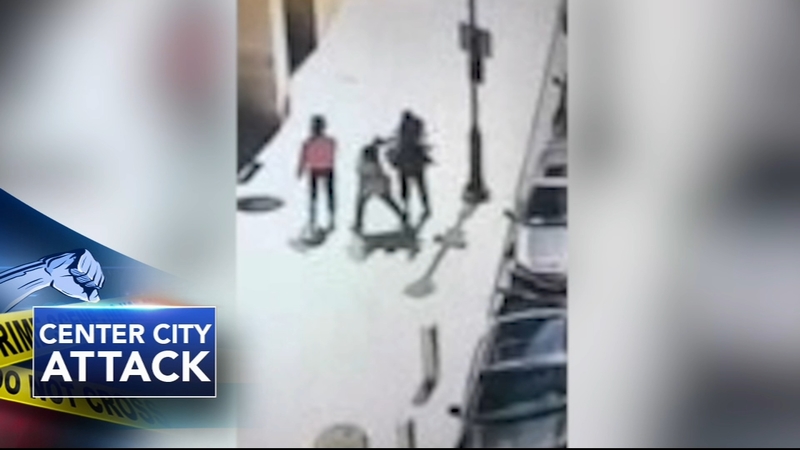 PHILADELPHIA (WPVI) -- Philadelphia police are investigating an attack on a 27-year-old woman in Center City on Easter Sunday.

The incident happened around 2 p.m., where surveillance footage showed a man approach two women walking down 11th and Filbert streets.

The video showed the man strike one of the women and then walk away.

"I heard this eerie scream," said a man whose surveillance camera caught the incident.

The man said he heard the woman's cries outside his office.

"I could hear it was a constant kind of like a cry, so I looked up at my camera," he added. "On Easter Sunday, nobody expects to have your head almost taken off by a smack."

The camera also caught police apprehend the suspect a block down at 11th and Arch streets.

Police say the man is homeless and concluded that this was a random attack and nothing racial was said to the victim, who is Asian.

The attack happened up the street from Bar-Ly.

"When you see a grown person hitting a woman, it's just disturbing. It's very disturbing," said Buu Ly, the owner of Bar-Ly.

The owner said this incident is upsetting during a time crimes against Asian-Americans are rising in the country.

Councilmember Mark Squilla said he's hearing growing concern about the lack of safety in the area.

"Get our streets back, so people feel safe again. Because right now, they do not feel safe because they think the lawlessness is running rampant throughout the city," said Squilla.