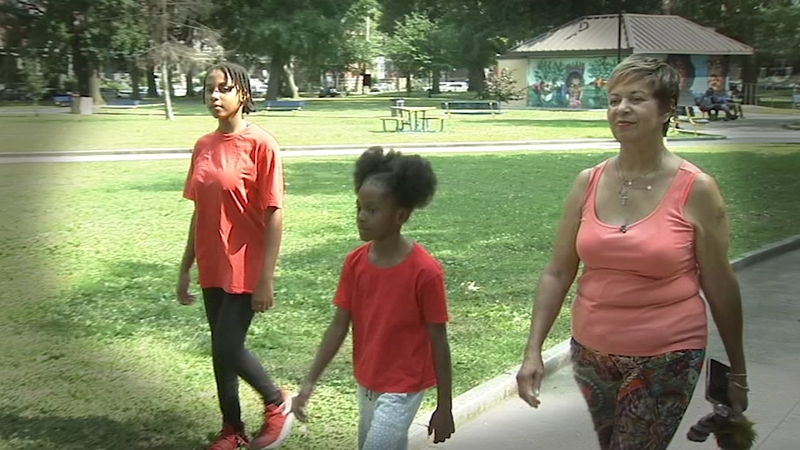 PHILADELPHIA (WPVI) -- Foster homes aren't the only solution for children of opioid-addicted parents. Many times, that responsibility falls on a grandparent.

These are people who've raised children once, and are now being called on to do it again.

But the circumstances can challenge those grandparents like they've never been before...

Keeping up with an 8-year-old and 10-year-old isn't easy for most adults, and that's especially true for a grandparent.

"I don't think they understand when I say 'gram's tired,'" said Judy Baughn of West Philadelphia, who is raising granddaughters Nevae and Carly on her own.

She said she never thought in her wildest dreams she would be raising children again.

"Nothing like this has ever happened to anyone in my family," she said. "I didn't expect this at all."

"Sometimes I would cry, I'll tell you the truth. I felt so bad for them and I didn't know what to do," Judy said.

"You don't ever want to take kids from their parents," said Judy. "I just kept praying that it would work out, but it didn't."

Judy says the state of New Jersey took Nevae and Carly away from their parents for neglect, but when she first petitioned to adopt them, she was denied.

"So I decided I was going to resign from my job and devote my time in getting my grandchildren," she said.

Judy Baughn talks about her fight to adopt her own grandchildren during an interview with Action News reporter Nydia Han.

Judy also gave up her plans to retire to the country and instead moved to Philadelphia.

"And in the process of it all, from being so devastated, I had a heart attack," she said.

She left the hospital two days later to continue the adoption process and eventually her request was approved. That was three years ago.

"My oldest granddaughter, she's special needs and I never had a special needs child," Judy said. "At first I felt really overwhelmed because I didn't know where to go, what to do, and I'm still feeling my way."

Approximately 2.6 million children are currently being raised in grandfamilies. 100,000 children in Pennsylvania are being raised by grandparents or other relatives, and experts say this number is rising as the opioid epidemic devastates communities.

So the federal government has created a task force to support grandparents like Judy.

"So that they can have the info they need to do the best job possible to raise grandchildren without a lot of preparation," said Sen. Bob Casey (D-Pennsylvania).

"It's supposed to give us more resources and place everything in one place so it'll be easy for us to connect with and get help," Judy said.

And Judy says despite the challenges, she's happy her grandchildren are with her.

"It's a different kind of a love as a grandparent," she said. "It has its rewards."