Police say the burglars are targeting houses that appear to be unoccupied.
WPVI
By Jaclyn Lee 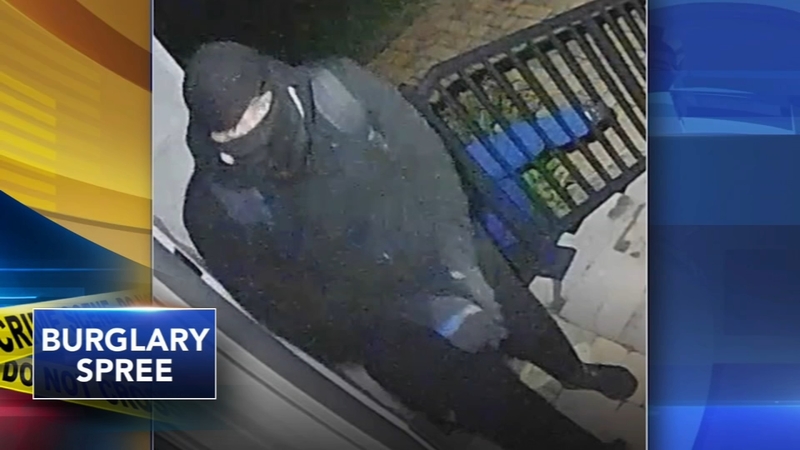 ABINGTON TWP., Pennsylvania (WPVI) -- Abington police are warning homeowners after a series of break-ins in the last three weeks.

"They're trying to target homes where nobody is home," said Detective Lieutenant Steven Fink of Abington Township Police. "They smashed their way in through the back of the house and on one occasion, they ran up to the master bedroom and stole some property belonging to the residents."

Officials said they do not believe the suspects are dangerous, as they ran away in two separate break-ins when they discovered the homeowners were inside.

"We believe they're looking for houses that either have no lights on, no cars in the drive, where it just has an overall appearance where no one is home," said Fink. "Trash cans haven't been brought in yet, mail is still in the mailbox. They're hoping that no one is home in these houses."

Officials say they believe the same suspects are responsible for a string of robberies in Warrington, Bucks County. Police say there are steps homeowners can take to deter these suspects.

"We would advise homeowners to leave your lights or timers if you can. If you're going away for an extended period of time, if you have a car you usually park in the garage -- maybe a neighbor or something can park in your driveway to make sure it looks like someone is home."
Report a correction or typo
Related topics:
abington townshipburglarytheftbreak in
Copyright © 2022 WPVI-TV. All Rights Reserved.
BURGLARY
Suspect breaks into Ritz Carlton in Center City, steals items
Burglars targeting Asian business owners in South Jersey
Suspects sought for $134,000 jewelry theft in North Philly
Man breaks into off-campus apartments, steals underwear: Police
TOP STORIES
12 shot and 4 dead after string of shootings in Philadelphia
AccuWeather Alert: Hot & Humid Sunday
Police: Triple shooting leaves 2 teens critical in Penn's Landing
Philadelphians find ways to stay cool amid scorching May weekend
Officials: 3 juvenile swimmers pulled from rip currents in Ocean City
Some peanut butter recalled for potential salmonella
Officials investigate 2 fatal accidents in Gloucester Twp.
Show More
Dog battles mountain lion to save owner's life
Possible monkeypox case linked to patient in NYC
Police: West Philly shooting leaves man dead, teen injured
Colwyn Borough aims to overcome struggles with new chief
Experts issue warning to protect your cryptocurrency accounts
More TOP STORIES News